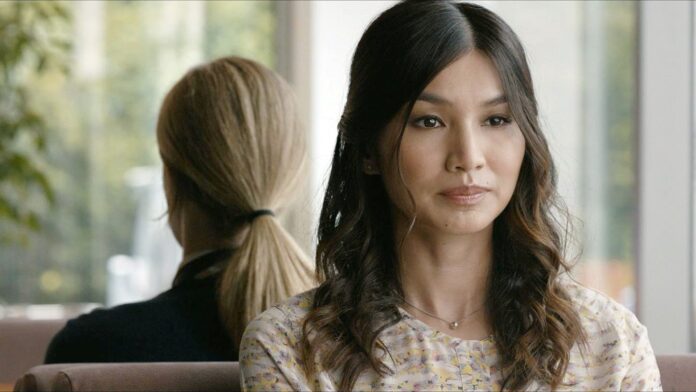 What is a human life worth? How is it possible that a woman like Agnes (Carla Juni) could agree to kill another human being? Is it the money? Or are there other forces at play? A funeral. A young widow and two adult children. Agnes is burying her much older husband and the children are his, not hers. Agnes senses that someone is watching her and glimpses a woman roughly her own age standing nearby. Within seconds, the woman is gone. They were once very close, Agnes and Henny (Gemma Chan). A friendship both rewarding and demanding, which ended in disaster. Now Henny seeks reconciliation.

But Agnes seems cautious. Agnes is completely thrown by Henny’s proposal. Henny is married to David and asks Agnes to help her murder him. She’s prepared to pay good money and also to let Agnes choose the manner in which David is to die. Agnes realizes that the past has caught up with her and that she has no choice. What really happened between Agnes and Henny in Bruges all those years ago? How could it be that two people who enjoyed one another’s company so much, could end up hurting each other so badly? They, who had loved each other so much.

The Intrigo trilogy so far has been quite frustrating with me, especially the first two. They all have such terrific concepts that end up ultimately going to waste. The writing in each of them manages to handle the stories in such sloppy ways that make you disappointed knowing what the potential could have been.

With that being said, however, I have noticed over the course of these three movies that they slowly get better as each movie passes. The weakest one of the bunch is without a doubt the first, Death of an Author. It was painfully complex and ridiculously sloppy. Samaria was a step-up but still not enough to impress. Thankfully, in a shocking twist, Dear Agnes is not only the best entry of the trilogy, but it is actually a good movie.

A large part of why this is is due to the screenplay. It’s heaps and bounds better than the stories we got previously. Yes, it still plays out in the traditional style of each Intrigo film before it, but it’s either I have gotten used to this style of storytelling now, or the plotline here was actually interesting. Some part of me thinks it’s both.

Daniel Alfredson and Birgitta Bongenhielm wrote the screenplay for Dear Agnes. A screenplay that, much like the others, takes a bit to get going, but eventually gets genuinely interesting. I felt a true connection to the characters this time around because they were actually fully developed.

Before even going in to watch this movie, I was already a little bit excited knowing that Gemma Chan was in the film as one of the lead characters. Chan is not new to the field, starring in high-profile pictures such as Crazy Rich Asians, Captain Marvel, and Transformers: The Last Knight. Her acting abilities have always impressed me, and they did once more here. She is powerful and raw as Henny, a character that mourns for the past and struggled with her friendship with Agnes. The way her story was presented was very detailed and thought-provoking.

But in addition to Chan, all of the other actors do a great job and have amazing chemistry with one another, namely Carla Juri and Jamie Sives. Together, they all three deliver strong performances in a movie that is finally deserving of their incredible acting talents.

I suppose the story could have delved a little bit deeper and could have taken these characters to even darker places, but the story we already got was still surprisingly fun and gripping to watch. Finally, we have a good Intrigo movie. It’s just a shame that its the last one.

Dear Agnes, the final installment in the Intrigo trilogy, finally manages to tell a compelling enough story worthy of its incredible actors.