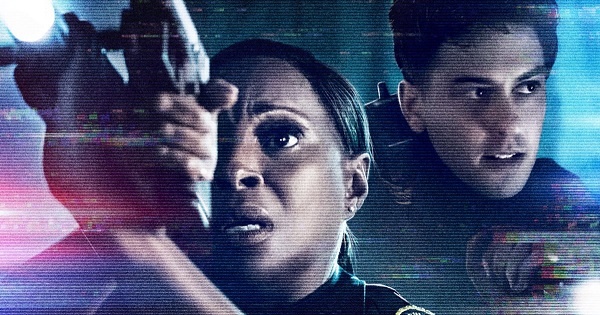 You don’t even have to follow the news to know that there’s a crisis in this county in regard to police departments and their treatment of black and brown communities. More than not, many people of color find themselves on the wrong (and unjustified) end of a police officer who “was in fear” for their lives and killed an unarmed young person. While many people in those communities have known of this “new” phenomenon for generations, thanks to cell phones and the police using their mandated body cameras, now it’s a big part of the public lexicon. And because it’s a part of our collective consciousness, of course, Hollywood will try and do some interesting stories surrounding police shootings with Body Cam. 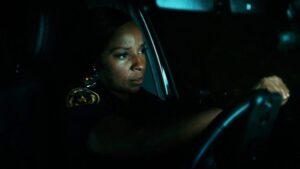 Last year’s Black and Blue had a rookie policewoman who learns about corruption within her department via body cam footage, while Body Cam takes the supernatural approach.
Fresh off a suspension for assaulting a citizen while processing the grief of her dead son, veteran police officer Renee (Mary J. Blige), comes back into the fold and is paired with a rookie cop Danny (Nat Wolff). While it seems to sort of start as some kind of Training Day situation, things take a left turn when they are called to assist a colleague during a traffic stop that ends horrifically for that person. After fining their fellow officer’s body freshly mangled, Renee checks the dashcam footage of her fellow officer’s car, and it is quickly revealed that some otherworldly thing has happened to him. Unfortunately, the footage quickly “shorts” out, so no one believes the fresh off of a suspension officer that some unseen specter killed her former partner.

Soon enough, there’s another attack on other police officers under bizarre circumstances, and even though the know nothing detectives think they caught the killers (two presumed gang members who also died during the encounter), Renee knows something is off and this situation is far from over. Renee discovers that a van and woman named Taneesha (Anika Noni Rose) is connected to everything, and she sets off on a path to try and figure out what exactly is going on. This makes the film (smartly) a mystery as much as it is a horror/thriller film. Every step she takes leads her closer to figure out who this monster hunting cops are, and why is this person doing it, which has a satisfying resolution.

Body Cam works very well towards the end when it starts to tie up all loose ends and gives you the full picture of why the monster does what it does, but the work up to it has a little bit of a pacing problem. The death of Renee’s child doesn’t really impact the story except to show that she lost her cool and beat up a citizen one day while processing her grief. At first, you think it’ll be more impactful to the story, but all it really does is display is that she and her husband (Demetrius Grosse) have grief issues to still deal with, and that she’s somewhat a tortured soul. But any character development for Renee is done through her trying to solve her fellow police officer’s murders. 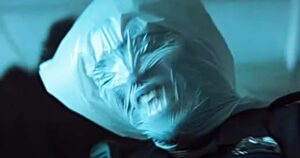 Body Cam has some great kills, is gory as hell (earning its R-Rating), and has plenty of tense moments complete with some interesting jump scares.  However, whenever the monster does its kills, it automatically makes the lights go dark to further the tension (and to hide the special FX budget-wise), and we are talking “Battle of Winterfell” dark, so you will find yourself squinting during all the best moments. Directed by Malik Vitthal, and written by Nicolas McCarthy with the purposeful tone of End of Watch and Get Out, Body Cam a socially conscious horror/thriller and as things get decluttered, the story works well, it just takes a while to get to the good stuff. The ending of the film comes to a strong resolution and makes a strong statement about police officers, corruption, and cover-ups. Even the cops you thought were good guys were just protecting the institution instead of the people they are supposed to serve. Real-life just needs cops like Renee, but not murderous ghosts. And Mary J. Blige doesn’t need to sing the soundtrack song for every movie she does!