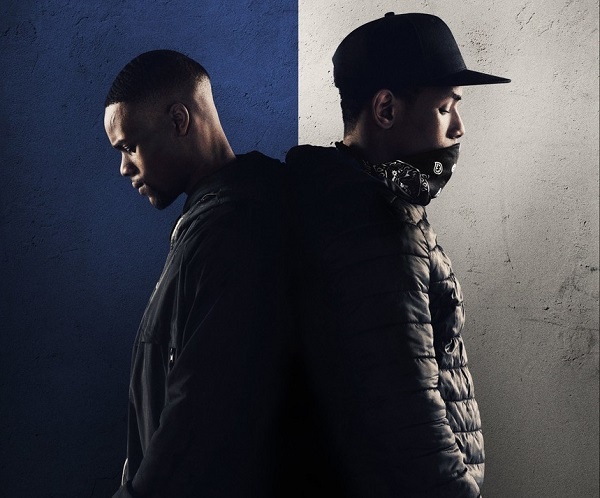 Thanks to Netflix’s revival of the UK’s Channel 4 classic Top Boy, we here stateside got to learn about what goes on across the pond in the black communities over in London. Once you get past the uniquely different slang terms, it’s a strong drama series and can pique interest in what else the UK can offer in that territory.

Enter director Andrew Onwubolu, also known as “Rapman.” Rapman created the successful YouTube series Shiro’s Story about London gangs told through the medium of rap/hip hop, which not only amasses almost 20 million views across 3 episodes released, but landed Rapman a management deal with Jay-Z’s Roc Nation management group to develop TV, films, and music But even more: a deal with BBC Films and Paramount Pictures to expand the themes from Shiro’s Story into a feature-length film, Blue Story. 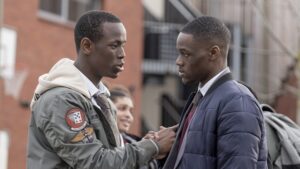 Blue Story centers on Timmy (Stephen Odubola) and Marco (Micheal Ward from Top Boy and fresh off his new 2020 BAFTA “Rising Star” Award) are childhood friends who have been neck and neck since before they can remember. They just happen to not really live in the same neighborhood, which has now been ravaged by beefs between the two neighborhood gangs (featuring the real-life gangs the “Peckham Boys” and the “Ghetto Boys”, who had a war in real life as well) in a “postal” war. Although Timmy is not in a gang, Marco’s older brother is the leader of one of the gangs. Both friends try and remain neutral to the different neighborhood’s beefs, but soon it gets too big which causes them to have to pick sides, and even then, they resist. But soon enough Timmy falls for fellow classmate Leah (Karla-Simone Spence) and a new girlfriend can break up a friendship quicker than a gang war could. A series of misunderstandings follow which escalate things beyond their control, and soon enough has Timmy and Marco on opposite ends as leaders of their respective gangs. They really don’t care about the turf war, it’s just their hatred for each other has boiled to the brim, everything (and everyone) else be damned.

What makes Blue Story really gripping is the acting, as well as the filmmaking and storytelling style delivered. Unlike most “hood movies,” which tend to glorify and sensationalize the violence, Blue Story operates more like a tragic story between two inseparable people as they turn from best friends to worst enemies. In fact, each moment that has violence has drastic consequences as the film continues, showcasing the problematic cost of this lifestyle. When there are deaths, they hit hard because of not only the authenticity of what’s happening, but because we have come to really love the characters it happens to. There are moments of the film depicting the gang war that is intercut with news footage of real gang fights going on in London, complete with grainy CCTV footage. Speaking of the violence, it’s worth noting that because of the UK’s rather restrictive gun laws, many gangs don’t opt for a gun, but instead, bats, knives, and machetes are the weapons of choice. Even though there are some guns in Blue Story, the bullet count is considerably lower than if this film took place stateside. It’s also very interesting how the gangs use social media as a propaganda tool against each other as well. 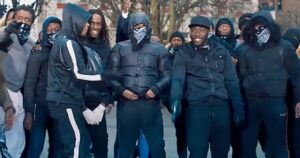 Michael Ward already stole the show in Top Boy last year but Stephen Odubola also shines. Both are currently heavy hitters in the UK drama scene, but you can expect them to blow up stateside very soon. Eastenders alum Khali Best also shines as one of the more vocal gang members in Blue Story. Many actors who were in Top Boy also show up as different characters as well. Newcomer Karla-Simone Spence is great as Leah, who has great moments when talking about Game of Thrones as well as talking about the fact that anyone from Peckham can do whatever they want in life, citing actor that John Boyega is from their neighborhood, and is in Star Wars, the biggest movie in the world. 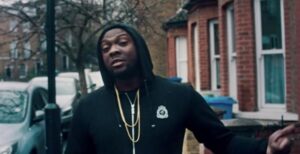 You can’t talk about the storytelling style without discussing Rapman’s rap interludes that take place throughout Blue Story as he breaks the fourth wall and raps the story to the audience. For one, the rapping he does is great and works very well to make Blue Story to operate almost like a musical. In fact, why hasn’t there been a hip-hop musical in the US by now? For God’s sake, Lin Manuel Miranda can make a hip hop-play about Alexander Hamilton, there should be a hip-hop musical by now. Hell, even Rachael Bloom made Crazy Ex-Girlfriend with a minimum of 3 musical songs on a weekly basis, a few even had hip-hop songs, so the US needs to step their musical game up, especially for hip-hop. And Rapman isn’t doing that mumble mess, so as an 80s-2010s hip hop head, I can appreciate the craft of telling a great story through rhyme and skills. Sure, it has British slang in the rhymes, so get used to “mad ting” and other stuff you might be unfamiliar with, but it still is awesome. While he does more rapping vs dialogue in Shiro’s Story, (as they are shorter in a feature-length film), the skill, storytelling, and just all-around greatness of his artistic style still remain. Simply put, what Rapman has done from a creative standpoint to incorporate hip-hop is something that works perfectly, and I’m sure will be replicated stateside soon enough.

Blue Story tells a fascinating tale of a Romeo and Juliet-styled bromance that has the same type of disaster that could be avoided if people just tried to simply talk and make better choices. Blue Story could get some possible comparisons to Boyz n the Hood: Both films were the inaugural movies by a promising director (Rapman and John Singleton), both films tell of the urban plight of gangs, both employ rappers (and in this case, have actual rapping as part of the dialogue) into the films as well, and both films talk about manhood (fragile masculinity), emotion, tribalism, and violence and how they all intersect dangerously to repeat a never-ending cycle. Whether it’s across the pond, or stateside, this is an issue that needs to continuously addressed by the powers that be.