Ever since it peaked in 2008’s Taken, we entered a new genre aptly coined by comedian W. Kamau Bell as “Old Man Action.” There, our heroes aren’t the young twenty or thirtyish super-jacked model-esq people, but instead are older, got a perfect dad bod, but still can kick all sorts of ass. While Neeson is the king of this film genre, Denzel Washington, Sean Penn, Tom Cruise (who really doesn’t age), and countless others,  including the now-aged action stars of the 1980s showing they still got it, have taken a stab at these type of films, and now it’s Tom Berenger’s turn in Blood and Money.

Originally titled “Allagash” for the northern Maine town the story takes place in and later renamed to Blood and Money, the film centers on Jim Reed (Tom Berenger), a retired, recovering alcoholic, sick, veteran, who lives in his RV and just wants to spend a few weeks in the quiet isolation of the Maine woods with the hope of shooting a buck. His only would be friends Bill (Paul Ben-Victor), a park ranger, and Debbie (Kristen Hager), the waitress at the diner he frequents in town. That all changes when he comes across a bag of cash that just happens to belong to a violent group of thieves that just robbed a casino and are trying to escape to Canada, and they want their money back! 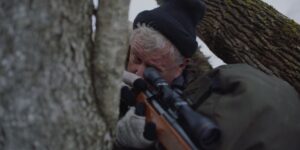 if this sounds similar to No Country for Old Men, that’s where the similarities between Blood and Money and the Oscar-winning film stop. In this film, Jim is not being hunted by Anton Chigurh… he is the story’s Anton Chigurh. At first, he tries to run, but after they disable his RV, Jim has to fight back. As each of the thieves come after him, he defends himself with utmost prejudice to the point that the hunted becomes the hunter and the bad guys become his prey. Unlike most similar films, James doesn’t have many mano-a-mano punching matches, but he’s great with a rifle, pistol, machine gun, and even a knife. It’s assumed that James was one lethal badass when he was in Vietnam, and it shows as he mercilessly takes out the gang. 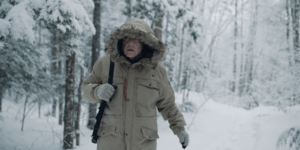 While Blood and Money is entertaining in regards to the cat-and-mouse game played as well as the shootouts, this film is rather light on the dialogue. Besides his interactions with his friends, and yelling at the bad guys, there isn’t much talking. While it’s mostly a solo show by Berenger, Maine itself is another character. Shot in the Maine towns of Bethel, Rumford, and Mexico (yes Mexico) by first time director and Cumberland, Maine native John Barr who has worked previously as a cinematographer and camera operator on such films as Frost/Nixon, Capote, and Greenberg, the wilderness feels like an additional character in Blood and Money. The directing is also great as the film has some great tense moments as things heat up.  It’s shot incredibly well and makes you feel as though you are right there with Jim as everything’s going on.

Blood and Money does force you to strain your suspension of disbelief as when James (who the film suggests has a terminal illness and is coughing up blood) is able to square up against someone 30 years younger and realistically beat him and shrug off punches. There’s a reason James is an expert marksman, so he can take care of his enemies from afar. Some of Jim’s backstory surrounding him killing his daughter from a drunk driving incident is meant to display how scarred, sorrowful, and broken Jim is in the film, but he’s also very cold-blooded as he opts for the double-tap in some situations. Overall, Blood and Money is a little thin on plot and dialogue, but it is saved by a strong performance by Tom Berenger as he delivers great.

Blood and Money is available on VOD on May 15th.