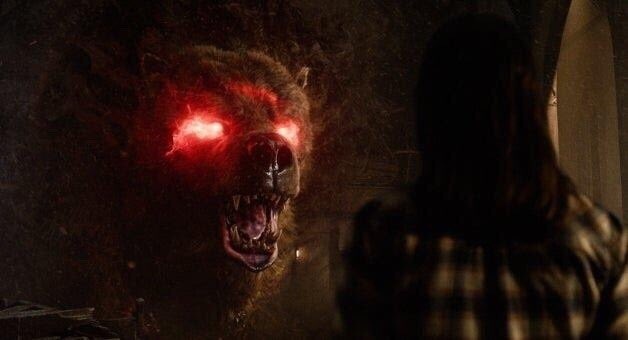 For months one of the big questions surrounding The New Mutants was whether Disney would choose to even release the X-Men spinoff in theaters. At the time, going straight-to-VOD would’ve been a final, embarrassing blow the mutant franchise, but now it would be totally normal! With the movie officially off the schedule due to the pandemic, don’t be surprised if that’s how it goes. But for now, check out some brand new stills that tease some Hellish encounters.

Courtesy of the New Mutants Updates Twitter account we’ve got some great new images of our best look yet at the Demon Bear. The Demon Bear is a malevolent spirit that frequently stalks Danielle Moonstar (Blu Hunt), and in one of these images it looks like they’re battling in Limbo, Marvel’s version of Hell. That’s backed up by another photo, featuring Illyana “Magik” Rasputin (Anya Taylor-Joy) carrying her Soulsword and preparing to enter Limbo by the looks of it.

In another we see a horrific, smiling creature that’ll be giving me nightmares tonight. I’m not sure what role that thing plays in The New Mutants, but it seems to be bursting through the doors of the hospital facility where the team is trapped.

Another image gives us what I think is our first look at Dr. Cecilia Reyes (Alice Braga) using her forcefield powers, confirming once and for all that she will be a mutant in the film. There was some debate whether she would retain her abilities.

With all of the moves Disney has been making lately, we should hear something soon about The New Mutants. The wait has been three long years and it’s hopefully about to come to an end.

Josh Boone Holds Out Hope For A ‘New Mutants’ Trilogy