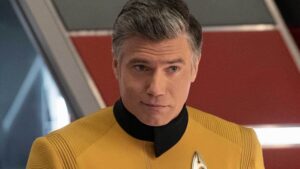 CBS All Access is punching it past warp 9.5 in regards to their Star Trek content.  The new streaming service already has delivered on two seasons of Star Trek: Discovery (which had a rocky start, but really hit its stride in season two) and brought back Sir Patrick Stewart back as everyone’s favorite captain, Captain Picard (I’m more of a Captain Sisko kinda guy) out of Star Trek retirement after 16 years (22 years if you only count Picard on TV versus movies) for Star Trek: Picard.  CBS All Access also has the Star Trek: Short Treks anthology series which showcase mini-stories from both shows as well as other things going on in the Star Trek universe.  Needless to say, Star Trek isn’t going anywhere.  And now, they have a new show on the horizon.

One of the best things about the second season of Star Trek: Discovery was the introduction of Michael Burnham’s (Sonequa Martin-Green) adoptive brother Spock (Ethan Peck), who was previously played by the late-great Lenord Nimoy from 1966 to 2003.  He played Spock at a different time, when he was more volatile and not as full of logic and managed to tap into an interesting brother/sister relationship with Martin-Green’s Michael.  The other awesome new addition to Star Trek: Discovery was Anson Mount as Christopher Pike.  Captain Pike (previously played by Jeffrey Hunter in the rejected Star Trek pilot from the 1960s and replaced with James T. Kirk (William Shatner) for the original show) was always someone talked about, but not shown in Star Trek as he was Kirk’s predecessor.  Anson Mount played as Pike for Star Trek: Discovery as he assumed command of Starship Discovery after they lost their captain via the events of the first season.  Mount’s portrayal was beloved by fans who then were clamoring for him to have his own spin-off show.

It looks like they got their wish as CBS All Access has greenlit production for Star Trek: Strange New Worlds for the streaming service.  The new show will take place after the events of Star Trek: Discovery as Captain Pike, Spock, and “Number One” (played by Rebecca Romijn who appeared briefly towards the end of Star Trek: Discovery), Pike’s trusted second in command who fans also have wanted to see since the 1960s, who we now know is named “Una” after 66 years.  Thanks to Coronavirus, production hasn’t started yet, but just the announcement is enough to make us Trekkies get excited for what the future has for the beloved franchise.

‘Spongebob’ To Skip The Silver Screen For Streaming