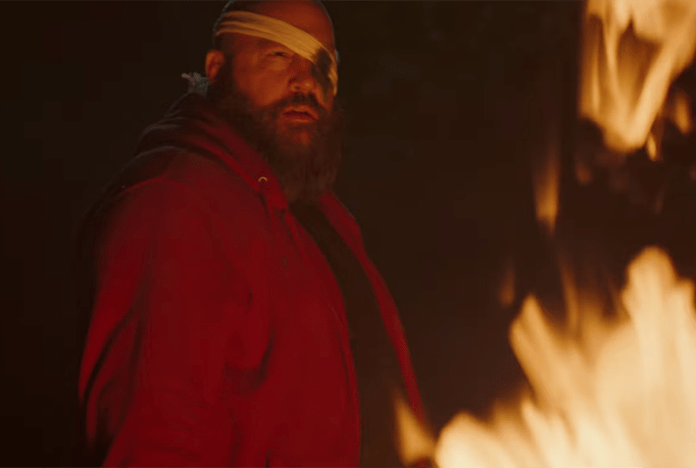 There have been few opportunities for Kevin James to do anything but play the goofball, or Adam Sandler’s sidekick. The last time was in the 2015 WWII drama Little Boy, and James was genuinely good in a serious role. Now we’re going to get to see him do something truly different, get sadistic, in the upcoming home invasion thriller, Becky.

James is impressively scary in the new trailer for Becky, which stars Lulu Wilson (Star Trek: Picard) as a young woman who must defend herself against a gang of neo-Nazi prison escapees looking for a missing key. James plays their leader, Dominick, with Joel McHale as Becky’s father and Amanda Brugel (The Handmaid’s Tale) as his girlfriend. Also in the cast? Robert Maillet, known to longtime WWE fans as the wrestler Kurrgan.

The film was directed by Cary Murnion and Jonathan Milott, with Amanda Brugel and Robert Maillet as co-stars.

Becky opens on digital platforms on June 5th, and I’m all in for it. Love seeing actors push themselves, especially the ones I don’t really expect much from.

Check out the trailer followed by the directors’ statement on the film below.

Becky is a twisted coming of age film, an ultra-violent Home Alone, featuring a 13-year-old girl channeling her teen angst to kick some serious ass as she engineers a brutal revenge against the neo-nazi prison escapees who killed her father and dog. It’s the kind of bloody escapist insanity we want to watch. Becky is ultimately confronted with a fork in the road at the climax. The unexpected decision she makes and the moral and ethical ambiguity it expresses is at the heart of what makes this film so unique.

We love challenging actors, and casting them in roles surprisingly different from anything they’ve done before in order to subvert the audiences’ expectations. We all know Kevin James as a lovable and hilarious comic lead in TV and film but no one has ever seen him like this before. As an intimidating, terrifying, neo-Nazi-convict-cult-leader, Kevin’s performance will shock you with not only his character’s unhinged convictions but also with his horrifying and depraved actions. He brings an intensity and physicality to the role that you have to see to believe, especially in contrast to all of his previous work. Joel McHale’s energy, enthusiasm and willingness to do anything was impressive, bringing a sincerity and grounded performance as Becky’s father. Lulu Wilson, who was actually thirteen years old when we filmed, is pure talent. The first day of filming in a particularly traumatic scene, she let out a heart wrenching scream, causing everyone in the room’s jaw to hit the floor. Her instincts and professionalism allowed us to capture complex emotional scenes quickly under strict child labor laws, which cut our set time with her in half.

In collaboration with our cinematographer, Greta Zozula, editor, Alan Canant, and composer, Nima Fakhrara, we crafted a unique fast-paced visual style that highlights this film’s shocking and violent twists and turns. We wanted to explore the challenge of executing a contradictory tone, walking a fine line of making visuals that you can’t take your eyes off, and simultaneously creating viscerally murderous scenes that force you to involuntarily look away. The films intentionally grounded emotionally in order to provide a firm footing for the action scenes that are heightened and borderline outlandish in places. Greta strapped herself to cables – hanging off cliffs, riding ATVs, and ziplines – to bring a sophisticated, elegant, and elevated vision to the cinematic energy. Nima created an outstanding score that utilizes breathing, toddler toy instruments, homemade percussion, including forks, knives and pencils. The sound is the glue that holds this film together.