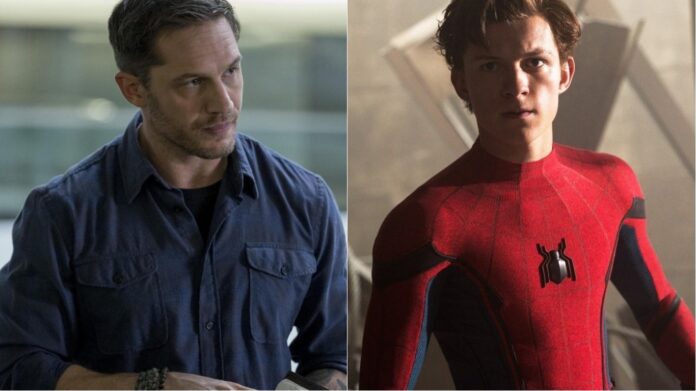 Oh Tom Hardy, you scamp! The actor is famous for wild teases shared on social media (his Fonzo/Capone stuff was great), and he’s back at it again and, at least to me, deliberately plucking at the nerves of Marvel fans on purpose. How so? By teasing, and then immediately deleting, images that suggest a Venom/Spider-Man crossover is about to happen.

Multiple times Hardy has posted an image, clearly showing him as Venom from the hit 2018 movie, chomping to death a certain webslinger. Each time Hardy’s posted this he’s taken it right down, but Brandon Davis of Comicbook.com was able to screengrab that shit.

Tom Hardy shared this post from his Instagram account and immediately deleted it. He signaled that Spider-Man will also be in the movie Venom: Let There Be Carnage!

This has, as you might expect, riled up the fanboy community into thinking Tom Holland’s Spider-Man will appear in sequel Venom: Let There Be Carnage.

There is NOTHING in Hardy’s image that supports such a thing. He’s prone to posting fan art just like this all of the time. That said, we already know Michael Keaton’s Vulture will be coming over from the MCU in Sony’s upcoming Morbius film, which features other references to Spider-Man. So a Venom/Spidey teamup isn’t out of the question.