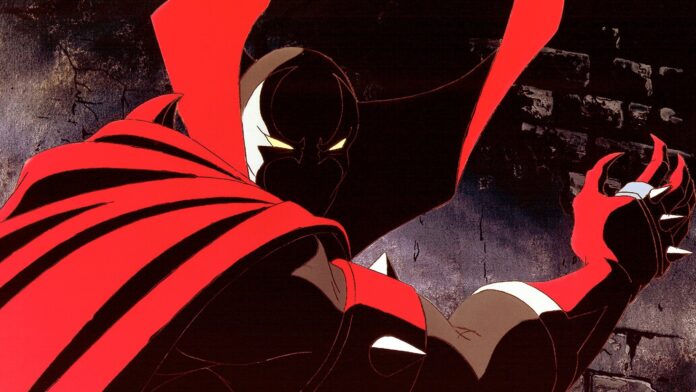 Todd McFarlane is fighting a perception that his Spawn movie, the one reportedly starring Jamie Foxx, has gone off the rails and even lost its star. For more than two decades McFarlane has been stringing his fans along with promises and teases, with absolutely nothing to show for it. And now with months going by and no information on the production, McFarlane is dangling yet another carrot just to keep Spawn fans interested.

Speaking with Comicbook.com, McFarlane shoots down rumors Foxx has exited Spawn. At the same time, he dangles that an even bigger name may be coming aboard. Who is this big star? He won’t say, but it would be a “grand slam”…

“About a month ago, I had a big fish. I just about got him on deck, right? It was the one that some people misheard and said I lost Jamie, it was like no an addition, an addition,” McFarlane said. “But we lost him and those are always frustrating because whenever you got the fish out of the water, pull them up on deck and the line breaks.”

“We got an offer out to, I think, a bigger fish. So, there weren’t too many bigger than the first guy, but anyway, we’ll see. If I could’ve got the last guy, it would’ve been a home run. If I can get this guy, it will be a grand slam. This one will blow up the Internet.”

For the record, we have no reason to believe anything he says about Spawn. McFarlane is currently running a Kickstarter for an awesomely-detailed Spawn statue. The campaign has been wildly successful, already surpassing $1M. But one way McFarlane keeps people invested in the many different things he does is by teasing big developments on a Spawn movie.

Asked by Forbes why he insists on Spawn being a movie, rather than a TV series like has been done to great acclaim previously, McFarlane admits it’s because he wants to direct it himself, and that has led to some challenges…

“People ask why not a TV show instead of a movie? Part of it is I’ve never directed a feature film. I had an itch to scratch. This might be my only chance. I’ve held on to the rights to attach myself to it. If it works out, we can always bring it over to television. Can we do it as a feature and release to a streamer? Sure, maybe. But there’s something to having your picture on a big screen, assuming that’s still an option once this is all over.”

“I wrote the first draft of the screenplay. If I’d done my job and written a screenplay that mattered, that would have sold it. I’m culpable on that end to start with. Then there’s the fear and risk on the financing side with a first time writer, first time director. That’s why I went to get Jason Blum [of Blumhouse] to produce, and attached Jamie and Jeremy – to add the quality to it. My goal is to continue to add those kind of quality people at all levels. The more I can add those people, the less I become relevant as a risk. Hopefully the studios will see that I am planning accordingly and going about this in a businesslike way to reduce that back-end risk, and at some point, we’ll move forward.”

There seems to be an extraordinary amount of “planning” for just this one movie. I won’t hold my breath, but hopefully McFarlane pulls this off at some point.

Todd McFarlane Could Walk Away From ‘Spawn’ As Production Stalls

Todd McFarlane Promises His ‘Spawn’ Reboot Will Be “Dark, Ugly” With “No Joy”

Todd McFarlane’s ‘Spawn’ Will Get A New Look, And ‘The Walking Dead”s Greg Nicotero Will Help