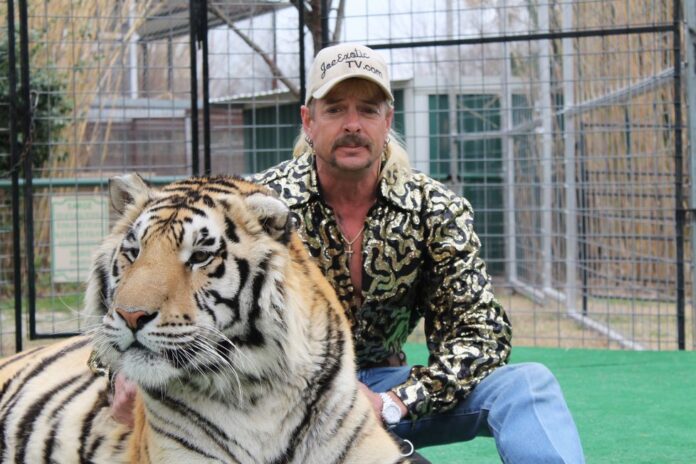 Well, you’ve gone and done it, America. We are never going to be finished with the terrible people from Tiger King. They’re all awful, and apparently we just can’t get enough. It should come as no surprise the bizarre docuseries was #1 most-viewed for Netflix over the last couple of weeks, but what may surprise you is just how well it did. We’re talking Stranger Things numbers.

According to Variety, Tiger King scored  a “U.S. TV audience of 34.3 unique viewers within the first 10 days of its release (March 20-29), according to Nielsen estimates.” Those numbers surpass the 31.2 million uniques of Stranger Things 2. Damn. It falls short of the 36.3 million of Stranger Things 3, but whoever would’ve guessed it would be so close?

The thing is, Tiger King didn’t even start off that hot. Debuting on March 20th, the big cat series reached about 740,000 unique viewers before absolutely exploding due to the national buzz. People heard about the incredible story of Joe Exotic, the mulleted owner of a big cat zoo with his gay marriage to two straight dudes, a murderous obsession with animal activist Carole Baskin, a truck full of expired Walmart deli meat, a surreal pop music career, and they just HAD to watch. Hey, I’m in the club, too. Watched the entire thing in about a day. I feel horrible about myself, too.

And so now what? Well, more Tiger King, of course!!! Unconfirmed reports are there’s an extra episode airing on Netflix this week, plus Investigation Discovery has a sequel series on the way. Oh yeah, and Kate McKinnon is starring in a TV adaptation. Like I said, we’ll never be done with these people.