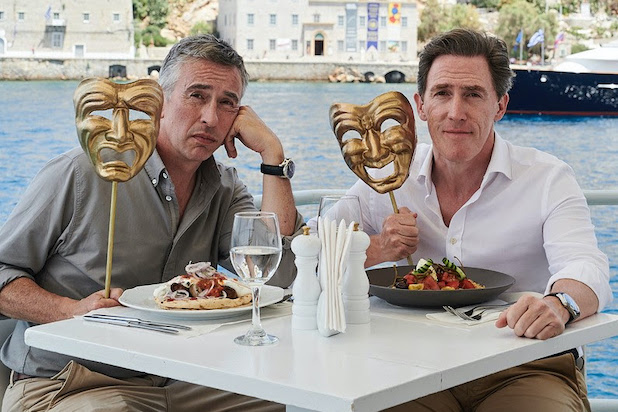 If you’re a fan of Steve Coogan and Rob Brydon, chances are you’ve already gone on The Trip, The Trip to Italy, and The Trip to Spain. The comedic road trip films, all directed by Michael Winterbottom, give the duo a chance to be funny at their leisure. And now they’re going on another trip, this time to Greece.

The Trip to Greece sets Coogan and Brydon on another historical and culinary journey, cracking jokes at one another’s expense the whole way. The plan is to retrace the path of Odysseus on his decade-long journey home to Ithaca after the Trojan War. Okay, sure, whatever, just do the Michael Caine impression, willya?

SYNOPSIS: When Odysseus left Troy it took him ten years to get back to his home in Ithaca. Steve and Rob have only six days on their own personal odyssey in THE TRIP TO GREECE. On the way they argue about tragedy and comedy, astronomy and biology, myth, history, democracy and the meaning of life! Featuring locations such as: Temple of Apollo at Delphi, the Ancient Agora of Athens, the Ancient Theatre of Epidaurus, the unique island of Hydra, the Caves of Diros, Nestor’s Palace, Niokastro Fortress in Pylos, and Ancient Stagira, as well as a lot of shooting in restaurants and hotels in Athens, Hydra, Lesvos, Chalkidiki, Pelion, Kavala, and at the Peloponnese.

The Trip to Greece hits theaters (?) and VOD on May 22nd.

Review: ‘Blinded By The Light’, A Thoughtful Crowd-Pleaser And Loving Ode To Springsteen