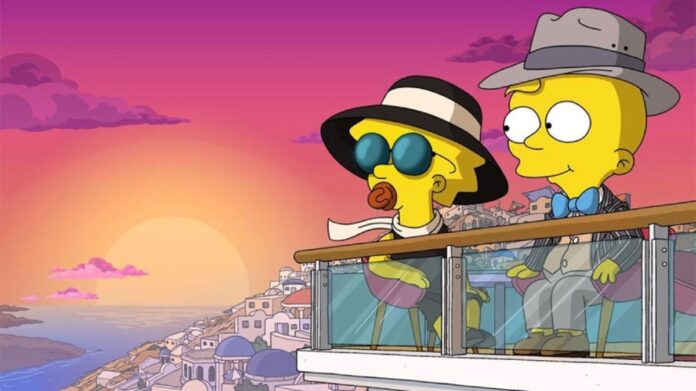 The theatrical run of Disney/Pixar’s Onward was disappointing, and was ultimately cut short by the coronavirus. That limited the number of people who had a chance to see The Simpsons short film that preceded it, Playdate with Destiny, the first Fox property to precede a Pixar movie since Disney’s acquisition. Now the short is making its way to Disney+ starting tomorrow, April 10th.

Playdate with Destiny is a Maggie Simpson story, in which the family’s toddler falls for a boy named Hudson and fantasizes a whirlwind playdate with him.  This marks the third Simpsons animated movie following 2007’s The Simpsons Movie and 2012’s Oscar-nominated short The Longest Daycare.

SYNOPSIS: “Maggie Simpson in ‘Playdate With Destiny’” begins “on a day that seemed like just another day at the park for Maggie Simpson. But when Maggie faces playground peril, a heroic young baby whisks her from danger — and steals her heart. After a blissful first playdate, Maggie can’t wait to see her new baby beau again the following day, but things don’t go exactly as planned. Will fate (or Homer) get in her way?”

This is a move by Disney to further solidify their control over The Simpsons brand by tying it closely with their other properties. With more than 50 million paid subscribers for Disney+, it’s also a way for them to keep providing fresh content. The Simpsons may have been around for three decades but none of those have been with Disney, and that means the potential for new stories.

The announcement was made by The Simpsons creator Matt Groening on Instagram:

Straight from the source.☝ ⠀ ⠀ Maggie Simpson in “Playdate With Destiny” is coming April 10 to #DisneyPlus! #TheSimpsons