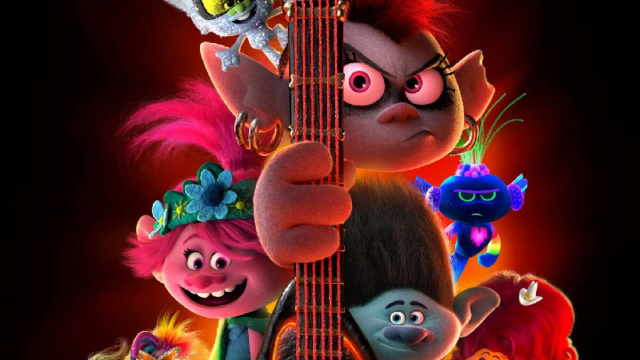 Who would’ve thought Trolls World Tour to be such an important movie in 2020? The 2016 film, which featured Anna Kendrick and Justin Timberlake as song-happy, pastel-colored trolls, was a surprisingly enjoyable treat with an earworm-worthy soundtrack. The sequel might’ve come and gone, but in the age of coronavirus, and a ballsy early move straight-to-digital by Universal, the film may be just what’s needed to dance away the pandemic blues.

Don’t get me wrong, Trolls World Tour isn’t great or anything. It’s not even as good as its chirpier predecessor; but it’s playful, colorful, and has a strong message of community, something we need desperately right now. The sequel expands on the Trolls world by introducing five other troll clans, each representing a different form of music. But just as we’re getting into the groove of the Techno trolls’ jams, in comes Queen Barb (Rachel Bloom) of the hard rock trolls to harsh the vibe. She’s on a “world tour” to wipe out every other form of music, so that only rock remains. To do that, the mohawked, tattooed Barb will need to collect each tribe’s magical string, and axe out the ultimate power chord.

In keeping with the previous movie, the story largely focuses on the optimistic Poppy (Anna Kendrick) and her grumpier pal Branch (Justin Timberlake), the latter now sporting an unrequited crush on the pop music queen.  Poppy believes all it takes a good pop medley to create harmony, but not even “Who Let the Dogs Out”, the Spice Girls’ “Wannabe”, “Good Vibrations”, and “Gangnam Style” can break Barb’s quest for dominance.

There aren’t as many catchy tunes this time around, and they certainly aren’t integrated into the story nearly as well. Timberlake had an Oscar-nominated smash with “Can’t Stop the Feeling!” but nothing as original or memorable is here this time. A ballad, “Perfect for Me”, is the closest this soundtrack gets, and it’s more meaningful if you really feel the connection between Poppy and Branch. As ever, the two trolls are polar opposites, which causes some conflict, but they always come together and have one another’s back.

Kids will get a kick out the many different Troll worlds that are visited, each voiced by a different celebrity guest star. Kelly Clarkson voices the big-haired Dolly Parton lookalike, Delta Dawn, queen of the country music trolls. A lot of fun are George Clinton and Mary J. Blige as Quincy and Essence, leaders of the funk and hip-hop trolls. Sam Rockwell provides an interesting twist to the linear plotting as Hickory, a cowboy troll who comes to Poppy’s rescue. There are too many cameos and characters to name, too many to keep track of, especially if you had favorites from the earlier movie. You might not care once the silver glittery Guy Diamond’s frizzy hair literally gives birth to the battle rappin’ Tiny Diamond (Kenan Thompson).

Ultimately, Trolls World Tour is a movie with a message. With a wink and a nudge it addresses cultural appropriation through music, especially by the pop genre which takes a fair share of blows in this story. Both Poppy and Barb have lessons to learn by the time this “dark” (as dark as the candy-coated Trolls can be) chapter sings its last note; lessons about loyalty, recognizing differences and accepting those differences in others. Even if it means tolerating a peppy rendition of MC Hammer’s “U Can’t Touch This.”