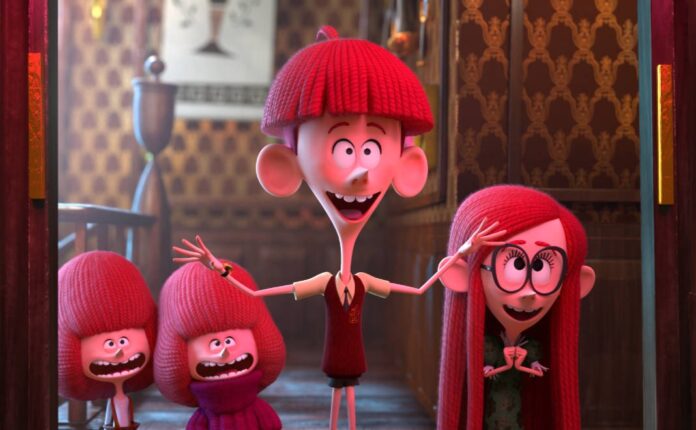 “If you’re interested in stories with happy endings, you’re better off reading some other book. In this book, there are no happy endings”, warns a narrator cat (voiced by Ricky Gervais) at the beginning of The Willoughbys. It’s an odd way to start a movie geared towards kids who expect to, y’know, like the characters they’re watching. But it may also be a warning to others to stay away from the genuinely unlikable movie as a whole, which is overstuffed with unfunny hijinks and visuals that are bright but ultimately lacking in personality.

The Willoughbys doesn’t make a whole lot of sense, which would be fine if the offbeat, strangely dark premise had characters we were made to care about. The story follows a group of siblings, led by the eldest brother Tim (Will Forte), who comes from a long line of heroic Willoughby ancestors, each sporting epic beards to match their greatness. That tradition ends with the kids’ selfish, facial hair-deprived parents (Martin Short and Jane Krakowski), who let the children starve and keep them locked away. So the siblings, which include the creative, sing-songy sister Jane (Alessia Cara), and the mischievous Barnaby twins (Sean Cullen), concoct a plan to send the parents on a vacation to every dangerous place they can think. The hope? That they’ll fall into a volcano, eaten by sharks, devoured by cannibals, you name it. The parentals are morons and walk into the trap at the very idea of a trip where no kids are allowed to join.

So yeah, The Willoughbys is about kids who want their parents killed so they can become orphans. Try as director Kris Pearn (Cloudy with a Chance of Meatballs 2) might, there’s no escaping such a grim setup.  The visuals are brightly colored but flat, the only exception the terrific job they did on the kids’ red licorice hair.  A trip to the bizarre candy-coated home of the Willy Wonka-esque Commander Melanoff (Terry Crews) makes no sense, and the character’s continued presence and connection to a spirited Nanny (Maya Rudolph) feel like it came from an entirely different movie.

While this may have been based on Lois Lowry’s popular book, The Willoughbys does little to endear audiences to the siblings’ plight. Tim, for all of his need to be the man of the house, is wormy and a bore. The twins are blandly weird, more like Minions than actual people. There’s some sympathy to be had for Jane, who has the clearest idea of what a normal, loving, and supportive family should be. Sight gags are crammed in a mile-a-minute, at the expense of making the Willoughby kids worth cheering on. I mean, should we even cheer on this macabre plan of theirs, anyway?

Together, the kids learn to build themselves a new, if utterly peculiar family and reject their parents’ cruelty. That’s a fine message which would’ve worked if The Willoughbys gave us any reason to listen to it.