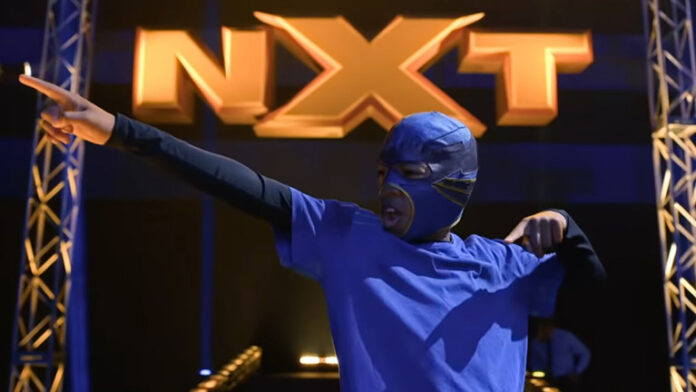 As a professional wrestling enthusiast of the highest order, the first thing I noticed about Netflix’s The Main Event, the streamer’s latest partnership with WWE Studios, was they go deep with the lingo. Superstars’ names are dropped like victims of Randy Orton’s RKO, while one kid talks about the weekly show’s production values. Apparently, WWE could use a new director. I would concur, but it’s weird to hear in a kids’ movie about wrestling.

But that’s the odd sort of world that The Main Event exists in. Much like wrestling itself, it’s full of contradictions and doesn’t always make much sense, but for a kid in love with sports entertainment, this wish-fulfillment fantasy could be a dream match . For us jaded adults who long ago learned wrestling’s secrets…well, it goes down for the count pretty early.

Directed by Jay Karas from a Larry Postel script, The Main Event is basically the pro wrestling version of Like Mike, the 2002 film where Lil Bow Wow found a magic pair of sneakers that made him a b-ball pro. Only here it’s 11-year-old Leo Thompson (Black Panther actor Seth Carr), who discovers a smell ol’ luchadore mask while running away from school bullies. Putting on the mask, he discovers that it gives him “The Rock” levels of arrogant confidence, but also superhuman abilities. As a diehard fan of the WWE, what’s a kid like Leo going to do? Why, enter a tournament to become the next great superstar in NXT, the WWE’s developmental territory.

The in-ring action, which features NXT stars such as Keith Lee (known as Smooth Operator), Otis (here known as Stinkface), and Mia Yim, come quickly and are made to look like comic book battles. Taking the name Kid Chaos, Leo leaps around the ring and hurls his much-bigger opponents with ease. It’s a lot like when Spider-Man became a pro wrestler in the pages of Marvel Comics; and just as unfair. Dude has super-powers!!! But then again, so do some of the other wrestlers. Stinkface, at one point, lets out a fart so massive it nearly blows away everyone in the arena. It wouldn’t be WWE without a little bit of gross-out humor for the kiddies. Other WWE superstars such as The Miz, Sheamus, and Kofi Kingston show up as themselves, which begs the question why the NXT guys weren’t allowed to do the same? Overall, the movie should’ve been even nuttier than it turns out to be. If you’re going to have a kid with super-powers beating up a bunch of overly-muscled adults, who somehow don’t realize he’s a child, then really go with it.

There’s an attempt to balance Leo’s athletic feats with a look at his troubled home life, but most of it comes away poorly developed. Adam Pally plays his somber father, who works too much as a means of avoiding something painful. Tichina Arnold provides some much-needed sass as Leo’s grandmother, a boisterous WWE fan (more like a Kofi Kingston fan) herself. Fitting with the target demo, The Main Event scores a knockout as it focuses on Leo and his core group of friends. A scrawny kid with little voice of his own, Leo uses the mask to win over his crush (Momona Tamada), but then must learn to be his own man. There’s even a heel turn (!!!) that becomes a big part of his growing pains.

Little of it fully comes together, however. The humor isn’t as over-the-top as it should be, and the personal drama can’t muster up a head of steam. Hard as it is to believe, professional wrestling has been on quite a roll with its cinematic endeavors lately. The Main Event doesn’t live up to the heights of Fighting with My Family or The Peanut Butter Falcon,  Hall of Famers at appealing to wrestling fans of all ages.

‘The Main Event’ Trailer: WWE And Netflix’s Teamup Film Has A Kid Beating Up Superstars