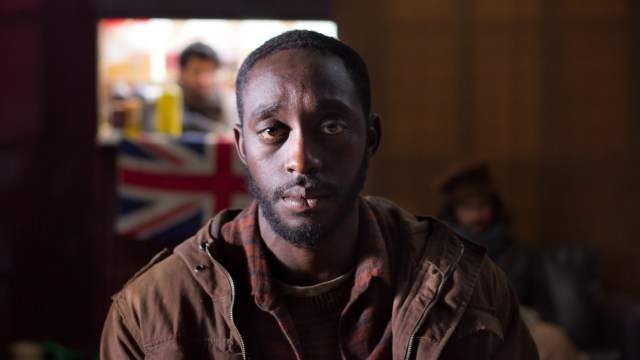 In the last few years, the rise of Right-Wing nationalism in many Western Democracies has been evident. Whether it’s Brexit or wanting to build a wall, the big thing that many places the blame for is the influx of immigrants to those countries. Usually brownish immigrants south of the border here in the states, but in the UK, it’s brownish immigrants coming from the Middle East and Africa. Thanks to non-stop coverage of “the immigration problem” in those countries, it’s very easy to see them as an “other” versus and an actual person. The Flood does a great job of trying to give people in these situations a face so that we don’t look down on them as an “other.”

Wendy (Lena Headey in her first live-action post-Game of Thrones role) is a hardened immigration officer who is dealing with her own personal problems, when her boss Philip (also Game of Thrones vet Iain Glen) assigns her a high profile immigration case to vet whether Haile (Ivanno Jeremiah best known stateside for Humans and guest-starring in Black Mirror and Doctor Who), who was apprehended wielding a knife at policemen, can declare asylum. Wendy’s a no-nonsense officer who assumes this case is pretty much a slam dunk denial, goes through the motions of listening to his story, which is captivating, harrowing, and also inspiring. 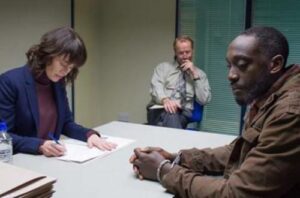 For the most part, The Flood has two settings: the interview room where Wendy is interviewing Haile, and is also told in a flashback sequence as you get to see how Haile went from the Eastern African nations of Eritrea all the way to the UK in the hopes for a better life. In Eritrea, he was a soldier who was forced to kill a presumed political prisoner, and after he defies that order, he is tortured, beaten, and left for dead. So, he begins his quest for a better life in England, free from persecution. But getting there is not an easy task. He’ll have to cross oceans with other migrants and refugees, stay in “the jungle” a refugee waystation, as well as negotiate with criminals and smugglers to make it to England. 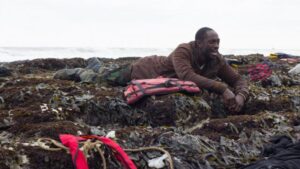 The Flood’s main strength is humanizing the nameless and faceless we see on cable news every day. They are not secret terrorists/cartel members, but instead, just simple people who are fighting for a better way of life for themselves and their families. The introduction of a Pakistani couple Faz (Peter Singh) and his pregnant wife Reema (Mandip Gill of recent Doctor Who fame), shows the need for people to band together to accomplish their goal. Faz and Reema need Haile’s help as the Afghan smugglers hate East Africans less than they hate Pakistanis (showcasing racism within marginalized communities). From their chance encounter to make a deal, a small family grows.

The acting in The Flood is top-notch. Both Mandip Gill and Peter Singh both are great as a worrisome couple who are trying their best to bring the child to a better world with all the anxieties of not only making it to the UK, but ensuring that their baby survives the harrowing trek. If you are expecting Iain Glen to be as noble as Ser Jorah Mormont, think again as he’s just a government stooge, who simply wants Hallie processed and kicked out of the country before the election happens. The real stars of the film though, are Lena Headey and Ivanno Jeremiah. Wendy, an alcoholic and fresh off a divorce where she lost custody, just wants to do her interrogation of Haile and get him out of the country at first. It’s only Hallie’s story (and Ivanno’s immense charm) that allows her to “see the light” and basically try to change the errors of her ways. Heady along with her brother Like serve as executive producers, and she is a member of the International Rescue Committee, so she’s putting her money, time, and acting where her mouth is for this role.

While the film is harrowing and emotional, the ending doesn’t work 100%. The film spends most of the time focusing on Hallie, but towards the end shifts to Wendy. It sort of follows the troupe of the white protagonist learning to be a better person on the back of the black secondary protagonist. That said, this is a gripping watch, if you find yourself talking about “those damn immigrants… taking all our jobs,” do yourself a favor: first off, shut up about it, and secondly, watch something like The Flood, which shows you a different perspective on people who risk everything (including life and limb) to just get a taste of the freedoms you usually take for granted.

Review: ‘Beanpole’ Is A Beautifully Bleak Tale About The Effects Of War