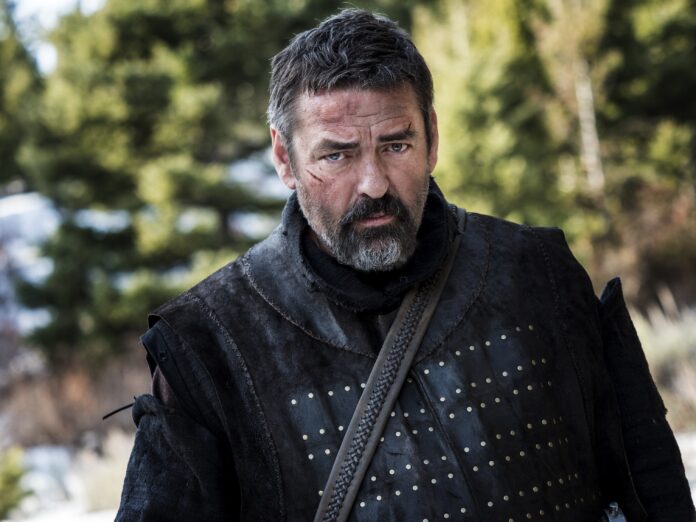 The myth and the reality of the legendary king of scots clash in the striking and intimate Robert the Bruce.  Those who partake of the historical drama will undoubtedly be drawn by the return of Angus Macfadyen to the role he played 25 years ago in Mel Gibson’s Braveheart, but this unexpected little film, which completes a weird pseudo trilogy with 2018’s Outlaw King, is less concerned with the glorification of gory violence than the true cost of war. A small-scale and personal film, it’s a bit slow to get moving but has some surprisingly emotional beats to make up for the lack of action.

Macfadyen, who also co-wrote the script, clearly has a genuine affection for the role. That he’s been gone so long adds to the authenticity of his performance. His Robert the Bruce is battered, beaten down by life and battle. But in the beginning, Robert the Bruce teases rousing battles and fairy tale theatrics. The year is 1306 and Robert clashes swords with rival John Comyn (Jarrid Harris, in a glorified cameo) for the Scottish thrown. Steel clangs against steel, blood is drawn inside the Greyfriars church and outside. The bold, towering Robert we see here isn’t the truth. He is just part of the bedtime story being told by Morag (Anna Hutchison) to her young children. Her young son Scot (Gabriel Bateman) worships Robert and longs to fight for Scottish freedom, just as his father did.

The reality is that Robert the Bruce is nobody’s champion at this point. In the year 1312, when the story actually takes place, he’s defeated and through with fighting. He’s still racked with regret at not being as beloved as the martyr William Wallace. Having given up and dismissed his men, Robert finds himself on the run from his former brothers-in-arms looking to collect the bounty on his head. Injured, Robert stumbles into the home of Morag, whose nefarious stepbrother Brandubh (Zach McGowan) wants revenge on the Scottish king. He also wants to claim Morag for himself, and force the eldest child son to join his army.

Macfadyen’s simple approach is interesting, choosing to put Robert the Bruce into the background for much of the story. Robert has very little dialogue, much of it laments about his past failures, and later, patriotic speechifying about Scotland’s independence. It makes for a very slow burn as we focus so much time on Morag and her family, their various tragedies, and shifting views on Robert the Bruce. By the time Robert starts endangering their lives directly by his meer presence, some may have already checked out.

That would be a shame because the film really picks up once the various plots converge, and the family must choose to either side with Robert or Brandubh. Will they remain loyal to the king? Or loyal to their own blood? Meanwhile, Robert, who spends much of the film either unconscious or silently sullen, must decide if he’s still got the will of the fight.

Richard Gray doesn’t have the budget to match the scale of Mel Gibson or David Mackenzie’s historical epics. The snow-covered hills of Montana don’t make the most authentic version of Scotland’s frigid winters. What he does have in his favor is Macfadyen, who has clearly thought a lot about Robert over the years. He’s delivered a more complicated, sobering portrayal that makes this fictional detour in the life of Robert the Bruce worth seeking out.

Robert the Bruce pics
1 of 6