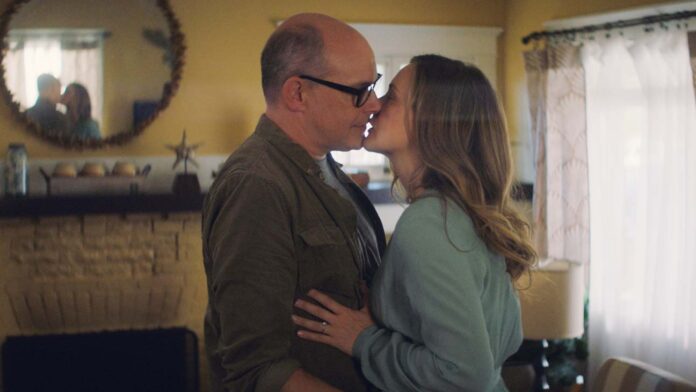 There is so much comic talent in Bad Therapy that you have to put blame elsewhere for the disaster it ultimately turns out to be. Alicia Silverstone, Rob Corddry, Michaela Watkins, Aisha Tyler, and David Paymer do their best with this bleak, witless dark comedy in which it turns out to be more dark than comedy. That’s not for the lack of trying, finding funny in the problems of others is a tough nut to crack and this movie comes armed with a limp noodle.

That lack of awareness permeates everything about Bad Therapy. We simply don’t care about anybody or what they’re going through, and the script never gives us reason to. After learning her conceited and very-pregnant friend Roxy (Tyler) is in marriage counseling with her husband, Susan decides she and Bob must go, and basically threatens the poor schlub if he doesn’t. Bob is about as limp-dicked as they come; he at least recognizes how lucky he is to score someone like Susan, so of course he goes along with it. But Judy recognizes something in Susan, and relays it to her own “therapist”, seen off-screen until a latter reveal that goes nowhere: “Their problems are very ordinary. As is she,” Judy says.

Turns out, she’s right. There isn’t much to Susan at all, other than her whining and weirdly paranoid notions that Bob is lusting after her teenage daughter (Anna Pniowsky) from an earlier marriage. Judy deduces that Susan is insecure and that Bob deserves better. So she sets out on a plot to seduce Bob, who begins hating the therapy sessions but likes the favoritism he’s shown in them.

Bad Therapy never escapes from the accusations Susan voices about Bob, try as it might to distance itself from them. It sets a grim tone that director William Teitler doesn’t have the creativity to lighten up, although to be fair Nancy Doyne’s screenplay lacks the satirical edge it badly needs. Her characters are flat, one-note, and unlikeable. Susan is vain and money-obsessed, Bob is weak and needy, and Judy is a wacko. Various subplots and backstories provide little emotional or comedic payoff, such as Bob’s attempts to launch his own TV network, or Judy’s past co-workers (including Paymer) who are attempting to find and shut her down.

It’s unclear exactly what Bad Therapy is going for? Subversion? Brazenness? Raunch? Far too ineffectual to be any of those things, it’s a movie that could use much clearer guidance, perhaps a bit of counseling would do?