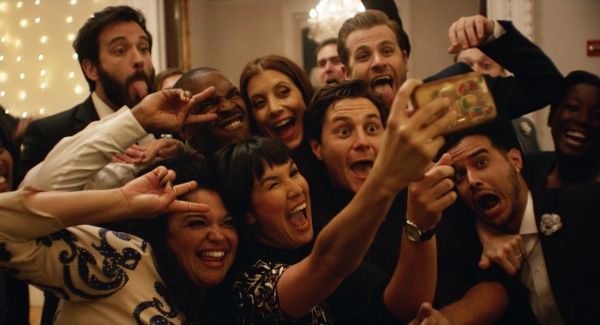 Almost Love, written and directed by Mike Doyle, explores the relationships within a group of thirty something year-olds living in New York. At the center of the story are Adam (Scott Evans) and Marklin (Augustus Prew). Adam is a talented painter who makes a living ghost painting for Ravella Brewer. While Ravella sells ‘her’ work for tens of thousands, Adam is barely able to make ends meet. Marklin, Adam’s boyfriend of five years, is a successful social media influencer in the world of men’s fashion. Marklin pushes Adam to want more and take his talents further, but Adam doesn’t seem to have that passion. Adam is constantly frustrated by Marklin putting their whole lives online. Everything seems to be broadcast to the world, and they can never have any peace and quiet.

Two other friends in the group – Elizabeth (Kate Walsh) and Damon (Chaz Lamar Shepherd) have been married for almost fifteen years. Elizabeth feels like things are great until she finds that Damon has been texting another woman. Adam tries to convince her that it can be innocent enough, but she doesn’t buy it. Trust is hard to gain, but easy to lose – and Elisabeth doesn’t know if they can survive this. 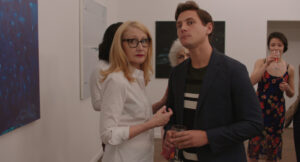 Finally, there is Cammy (Michelle Buteau) and Haley (Zoe Chao) – the two single ones in the group. Cammy seems to always be struggling in the dating game – picking losers and has now resorted to “scraping the bottom of the barrel.” Cammy’s current boyfriend of three weeks, Henry (Colin Donnell), breaks the news that he is homeless. Cammy seems to continuously cycle through the seven stages of grief with the revelation, completely changing her tune from one moment to the next. Haley is in her own predicament with her student Scott James (Christopher Gray). Haley has essentially been hired by Scott James’ parents to write his college admissions essays for him. Scott James is madly in love with Haley, feelings that Haley may reciprocate, even though Scott James is only seventeen. Each of the four relationships are on the rocks, but not all may be worth saving.

Almost Love dives into the changing dynamics seen within couples. On one hand people can change, their lives and situations evolve along with their hopes, dreams, and desires. Adam and Marklin are struggling through this with Marklin being in a completely different place in his life now compared to where he was five years before when he met Adam. On the other hand, you see how the lack of change can be detrimental as well. Damond and Elizabeth’s marriage is cracking under the weight of Damon wanting to have children and Elizabeth hating them. Damon thought he could change her views about having kids, but he can’t – driving a wedge between them. Doyle tries to highlight how tricky relationships can be and that they take a lot of effort. However even pouring in the work can sometimes not be enough.

Almost Love is carried by the dialogue within the scenes. The film is filled with witty lines and conversations between the main players. The humor really helps spice things up and Doyle puts in a few truly hysterical moments – most notably Cammy trying to craft the perfect text to Henry – that are fantastic. The six of them have a close-knit group and are completely in each other’s business, reminding me of the Friends dynamic. Accompanying many of the scenes is a fantastic score. The music ranges from hip and bouncy to powerfully somber – almost eliciting emotions itself. Almost Love has its fair share of enjoyable moments, and a few head scratching ones as well. The acting is consistently strong across the board, and the dynamics between the characters are great. The film breezes by and is an enjoyable enough story that it is worth a watch.

‘The Umbrella Academy’ Trailer: Netflix’s Superhero Series Is Like The X-Men, Only Way Weirder