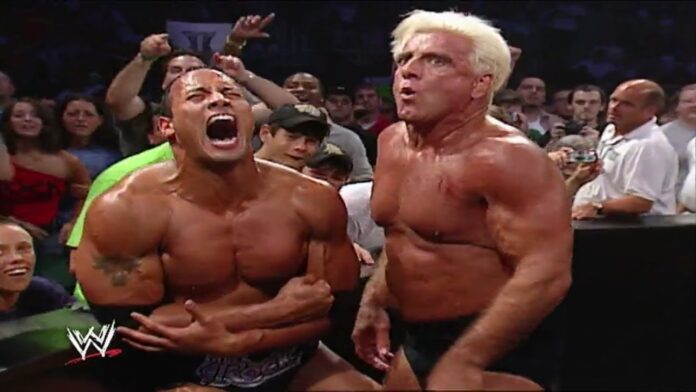 The “Nature Boy” Ric Flair is the greatest professional wrestler of all-time. I won’t hear any discussion about another. He’s long been deserving of a movie based on his wild life of stylin’, profilin’, limousine riding, jet flying, kiss-stealing, wheelin’ and dealin’, with many rumors going around over the years. Well, according to Flair himself it’s about to happen with Dwayne Johnson and WWE teaming up to do it.

Flair appeared on Sirius XM’s Busted Open Radio (via The Score) where he was interviewed by the best big man in wrestling history, Mark Henry (I’m biased, admittedly), and said The Rock’s Seven Bucks Production banner is working with WWE on a movie about his championship career…

“I talked to Dwayne and Dany Garcia … and Hiram Garcia and they’re gonna collaborate, the last time I heard, for all this stuff and make a movie with the WWE (about) me with Sue Levison, who now is with WWE and is doing a fabulous job. Sue’s got a great background. As soon as everything gets rolling again after that, they’ll make that movie. I am looking forward to that because I’ll have a lot of input.”

The 16-time world heavyweight champion also says a TV series about his career in the 1980s is in the works, but doesn’t give any details. Flair was neck-and-neck with Hulk Hogan as the most popular/hated wrestler in the world during that time. A series that even touches on that, or the rivalry between the NWA and WWF, would be amazing.

Flair has been known to exaggerate a little bit, I mean that’s a big part of his charm, so take this with a grain of salt for now. It would make sense, though, for Johnson and WWE to collaborate on this. The last time they teamed up it was on the hit film Fighting with My Family about WWE superstar Paige. A movie about Ric Flair should do even better.