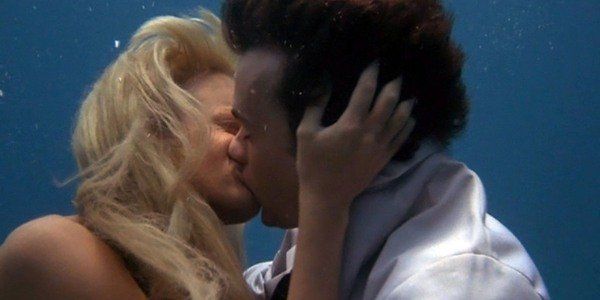 If you’ve never seen the Ron Howard film Splash, it’s pretty darn innocent. The 1984 rom-com stars Daryl Hannah and Tom Hanks, her playing a mermaid who falls in love with a human dude. But apparently, this lighter-than-light comedy was still just a tad too racy for Disney+, and couldn’t get in without a really misguided CGI edit.

So the scene in question finds Hannah and Hanks sharing a kiss on the beach. However, when she turns to leave, you can see, through her thick long hair, that she is totally naked. You catch a brief glimpse of her butt, and that’s it. Well, that was too much for Disney, who added some terrible CGI hair to cover it up. It looks bad, like the cast of Cats suddenly rose up and emerged from Daryl Hannah’s ass crack.

We expect much better from Disney, at least to provide good-looking CG. On the other hand, the hypocrisy is par for the course. They have no problem showing tons of Marvel violence, but a woman’s ass? For a fraction of a second? That’s a bridge too far.

However, all of this Splash stuff has reminded me of the planned remake from a few years ago. It would’ve starred Channing Tatum and Jillian Bell, with him as a merman. Think Disney would’ve furred-out his behind? Doubtful.

Disney+ didn't want butts on their platform so they edited Splash with digital fur technology pic.twitter.com/df8XE0G9om