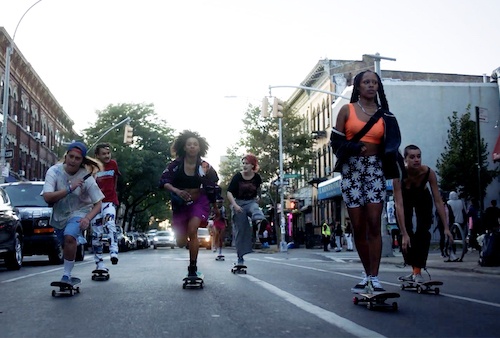 Released in 2018, Crystal Moselle’s Skate Kitchen is one of those films praised to the moon by critics (including us), but sadly went criminally-underseen. It showed a slice of New York life we’ve never seen on the big screen, following a female skater as she tries to break in the male-dominated skate culture.  Well now HBO is making that movie relevant again, and introducing it to a new audience with the spinoff series, Betty.

Directed by Moselle, co-written by Lesley Arfin (Love), and featuring much of the Skate Kitchen cast, Betty again centers on female skaters in New York City. There’s a bit more comedy to this, probably due to Arfin who also worked on HBO’s Girls, but the Moselle’s realistic, street-level style remains fully intact. I can’t wait for this.

Fortunately, I won’t have to wait long. HBO will premiere Betty on May 1st.

SYNOPSIS: Opinionated and loyal, Janay (Lovelace) is strong willed and stubborn in ways that both help and hurt her. Honeybear (Moonbear) is a quiet storm. Her flagrant style is a ruse; an armor she wears to hide her emotional struggles. Kirt (Moran) is a lover (to the ladies), a fighter (to the rest of the world), and a little kid in the body of a woman. She’s the funniest person alive, but even if she knew it, she wouldn’t care. Meanwhile, Indigo (Russell) is a street-savvy hustler trapped in the body of a well-to-do art school drop-out. On the edge of the group is Camille (Vinberg), guarded, perceptive, intelligent and awkward. She wants to be down with the dudes in the skate park and has fought hard for the small space she’s carved out with them, but she needs to realize that cool points don’t actually add up to the sum of anything, especially in the eyes of the other girls.