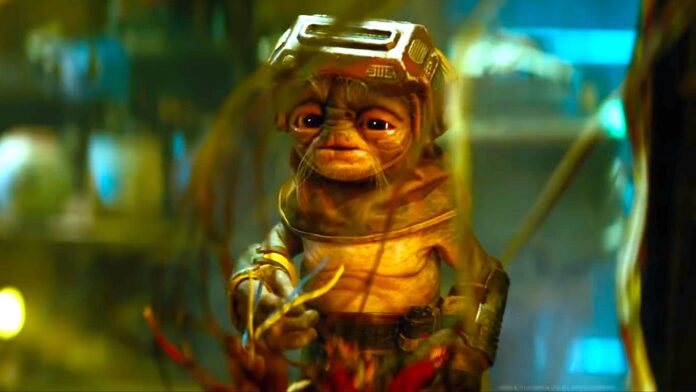 I’m in the minority here, admittedly, but I thought Babu Frik was terrible. The tiny alien droid tech from Star Wars: The Rise of Skywalker is one of the few things most people seem to love about the film, especially that moment in the final battle when he, quite unexpectedly, returns with a triumphant “Hey!!!”

Was Babu Frik always meant to come to the rescue? Or did he meet a more grim end on his destroyed home planet of Kijimi? Empire Magazine is doing a full history of Babu Frik for their upcoming issue, and they suggest producer Steven Spielberg may have had something to do with saving his life.

Empire spoke with creature effects guru Neal Scanlan, concept artist Ivan Manzella, and Babu Frik performer Shirley Henderson, and they share what may have been Spielberg’s part in the story…

“It could be a rumour, but I believe [director] J.J. [Abrams] screened the movie for Steven Spielberg, and at the end Spielberg said, ‘What happened to Babu?’,” Scanlan explained. “Everybody thought, ‘Oh God, what did happen to Babu?’”

“I think he was going to die originally – I think the AD shot that,” Manzella said. “When the planet [Kijimi] was blown up, he was on it.” Scanlan continued: “We shot several other sequences. The ILM guys found one, lifted out Babu and put him into Zorii’s ship at the end.”

I think this is a stretch. For what reason would Spielberg want to get so directly involved? Did he realize having Babu Frik pop up at the end would be a rare moment of happiness for many in the audience? Perhaps. Maybe he just realized you can sell more Babu Frik toys with him alive than scattered as space dust.