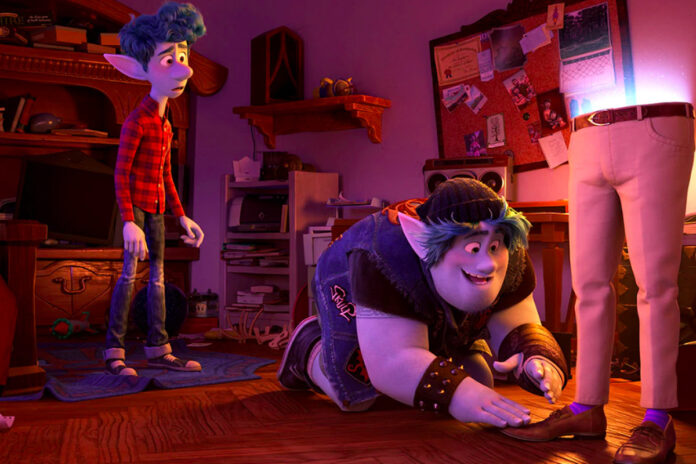 Such is the price of Pixar’s incredible success that we basically grade their movies one of two ways: either they’re instant classics, or they’re simply enjoyable. You won’t find any that are outright bad, although the potential for disappointment is always there due to unfairly high expectations. Simply put, other studios wish they could measure up to Pixar’s scraps, and if Onward were from anybody else we’d be praising it as being Pixar-worthy. Oddly enough, being from Pixar is exactly why this curious roadtrip oddity feels like just another day at the animation office.

A mix of Harry Potter, Warcraft, and Weekend at Bernie’s, Pixar has something truly weird on their hands. Despite all of the magical journeys Pixar has taken us on over the years, Onward is actually set in a fantasy world, one of true magic, and yet it only sporadically has the sense of wonder we’re accustomed to. While still deeply intimate, packing quite an emotional punch in the bookending sequences like ALL Pixar movies do, it’s the story itself that travels fairly generic territory.

Marvel bros Tom Holland and Chris Pratt voice elf brothers Ian and Barley Lightfoot, who live in a common suburb in a world very much like our own. But in a brilliant introduction we see that this used to be a place of great magic, where wizards who could wield it were worshipped. But then somebody screwed it up by introducing technology, and suddenly everyone started looking for the easy way out. So the ease of technological advancement has sapped the world of its magic and imagination; the mighty centaurs no longer run wild but are overweight cops, like the boyfriend to Ian and Barley’s single mother Laurel (Julia Louis-Dreyfus); the once-proud unicorn is basically like a garbage-devouring raccoon, and dragons are domesticated as dogs. And who needs a magic spell to get anywhere when you can climb into an airplane, a car, or a beat up old van named Guinevere?

But maybe there’s still a little magic left out there in the world? That’s what Ian’s dead father hoped, and he arranged for his future son to receive quite the gift on his 16th birthday. It turns out to be a magic staff, one capable of incredible powers, including a spell to return dear ol’ dad back to the land of the living for 24 hours, so he can see who his sons grew up to be. But Ian, lacking any confidence and still being new at this whole magic thing, botches the spell and only returns half of his dad, a pair of disembodied legs, which is pretty morbid especially for a Pixar movie.

I was actually down for it being morbid and twisted, if Pixar were willing to really run with it. Occasionally, they do, but those moments are fleeting. Ian and Barley set out on a journey to find a rare “Phoenix stone” to complete the rest of the spell, dragging daddy long legs with them in a variety of ridiculous disguises. But other than an unusually-timed dance sequence, the bulk of the humor comes from the mismatched siblings. Ian is one of the least-compelling leads Pixar has given us this side of The Good Dinosaur. His entire thing is that he’s shy, introverted, nervous, and desperately wants to be the confident guy others say his father was. Barley is far more interesting, though. A mix of every frat boy character Chris Pratt has ever played, from Parks & Rec to 10 Years to Guardians of the Galaxy, Barley is an expert in magical spells because he’s a fierce Dungeons & Dragons player, insisting the game is historically accurate in every way. For all of Barley’s knowledge, he doesn’t have the magic gift, only his disbelieving brother Ian does. Being the older  bro, Barley has the stigma of being a slacker and a loser. If this were the 1980s and this weren’t a Disney/Pixar movie, he’d be carrying around a bong. But magic is something Barley knows, and part of this adventure is proving to Ian that he’s someone who can be counted on.

All of this plays out with sincerity and earnestness, making for a film that will pluck at your heartstrings when it needs to, and have you chuckling at the mundane repercussions for some of the world’s most magical creatures. Octavia Spencer plays a once-fearsome manticore who has been reduced to running a Chuck E. Cheese-like restaurant, worried about investors and potential lawsuits. She teams up with Laurel to have an epic quest of their own, which is fun enough to maybe launch one of Pixar’s terrific shorts in the future. But some of the other diversions like creative punch, like an encounter with a gang of angry motorcycle pixies. The ensuing car chase is pretty forgettable. The whole time it’s tough to shake that Onward is set in the most fantastical of settings and the bulk of it finds Ian and Barley unsure which direction they should drive in their van. Surely, there’s something more they could’ve done? That goes to the movie’s visuals, as well. Sitting down to it, my first thought was this looked like a Dreamworks or Sony Animation film. They’re perfectly fine, just not up to Pixar’s vibrant standards. But that’s pretty much par for the course for Onward, a film that sits smack dab in the middle of the Pixar totem pole.