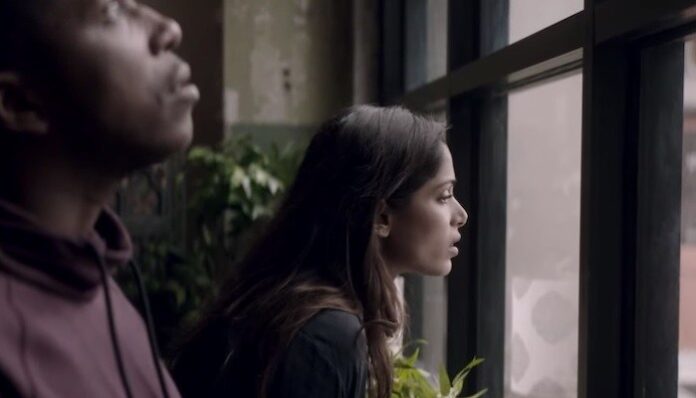 Women. They say you can’t live with them or without them. Well, in the new film Only from Writer/Director Takashi Docher takes that turn of phrase and transforms it into a bleak post-apocalyptic survival tale. In a world where a giant comet lands on earth containing a deadly disease that only affects women, couple Ava (Slumdog Millionaire’s Freida Pinto) and Will (Hamilton’s Leslie Odom Jr.) decide to leave their sterile and quarantined apartment to have one last camping trip before the enviable happens.

With a bounty on every surviving woman’s head, they travel to a waterfall, Ava’s last wish. As they try to stay hidden and savor their last moments together, the timeline alternates between the present and the past, focusing on both the government’s response to the comet and Will’s growing paranoia and shift in the couple’s relationship. Touching upon real emotional and societal questions, this sci-fi drama fails to find the cure for its fundamental ailments.

Despite being an independent film with a limited budget, Docher creates a pretty solid, believable world. Dark and dreary, the lack of women and the devastation of that loss on the world is well thought out and well-executed. Need to know exposition is told effectively through flashbacks and news reports. The measures that the government takes to restart the population, hunting women and harvesting their eggs for future embryos to putting a two million bounty on any healthy females, doesn’t seem that far-fetched, especially under current political circumstances. Docher raises really interesting philosophical questions within the sci-fi genre, that would have been even more effective with some sort of emotional core.

Despite the effectiveness of its worldbuilding, this film is really a love story. Its whole premise rides on the chemistry and connection between the leads. As individual performances, Odom Jr. develops a commanding tone as a loving boyfriend turned overbearing father/predictor/doctor/cop figure to his girlfriend. Ava is supposed to be the emotional anchor of the film, however, there doesn’t seem to be much behind Pinto’s portrayal of the character. There’s nothing really endearing about her other than being the only woman left on earth that we know of. Thus the chemistry between Eva and Will is severely lacking. There are a few moments of reprieve towards the end of the second and third act, but not enough to redeem itself or make an impact.

Already bleak, the film feels heavier with an overdramatic score and combined with its chemistry problems, it seems to take its self too seriously. The resulting film is one of great potential but also one that can’t survive its execution.