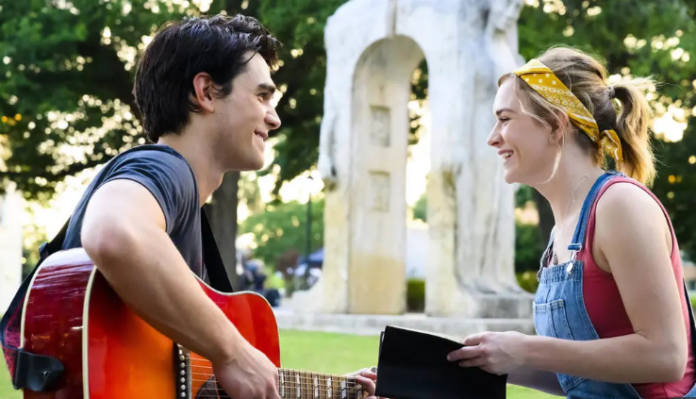 I Still Believe tells the true story of Christian singer Jeremy Camp (K.J. Apa) and his first wife Melissa Henning (Britt Robertson). In September of 1999 Jeremy was about to make his trip across the country to Calvary Chapel Bible College in California. Jeremy’s family all piled into the car to drop him off at the local bus station. Before sending their son off to college Tom (Gary Sinise) and Teri (Shania Twain) gift Jeremy with a beautiful guitar. Along with the guitar is the message to go write his story. With those words echoing in his head, that is exactly what Jeremy set out to do.

Jeremy wastes no time. Immediately he finds his way backstage at a popular Christian band’s concert and in good graces with their lead singer Jean-Luc (Nathan Dean). It was at this concert that Jeremy first sees Melissa. Jeremy would go on to say that was love at first sight. Melissa is incredibly religious and loves music – so Jeremy and Jean-Luc’s Christian songs are a perfect combination for her. Before long Jeremy and Melissa begin spending more and more time together just as Jean-Luc is helping Jeremy get his music career off the ground. John-Luc gives Jeremy opportunities to play at his concerts and time in the recording studio. 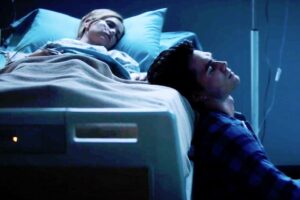 In December of that same year Melissa gets sick and a large tumor is removed from her stomach. After the surgery, she receives the terrible news that cancer has spread to her liver. Jeremy doesn’t let this dissuade him from being with the women he loves. He immediately proposes to her and stays by her side, trying to nurse her back to health all while continuing his music career. During concerts and radio interviews, Jeremy asks people listening to pray for Melissa and for her to get better. Jeremy tells his fans, “I’ll do the playing, you do the praying.” With love and faith guiding them, Jeremy and Melissa do all they can to overcome her cancer so they can try and live out the lives they dreamed of together.

I still Believe is an emotional roller coaster. The audience encounters the highest of highs and lowest of lows along with Jeremy and Melissa. Apa and Robertson deliver strong performances that drive the film forward. We experience a wide range of emotions from both and their chemistry on screen is undeniable. Another force behind I Still Believe is music itself. Whenever possible director Andrew and Jon Erwin give us at least some melodic music in the background of scenes. That spliced with Jeremy’s concert performances and song writing, music is virtually crammed into every possible crevice in the film.

There are some questionable moments and I Still Believe is far from perfect. However, the film is a straightforward religious romance drama and if that is what you are looking for, it delivers. I don’t see the film setting itself apart in any way or having any truly memorable moments, but that doesn’t mean it isn’t worth a watch. That being said, it is one that you can wait and catch on Netflix, just make sure to keep the tissues nearby.

‘Books Of Blood’ Trailer: Clive Barker Brings The Twisted And Macabre To Hulu Next Month

The Past Haunts New ’13 Reasons Why: The Final Season’ Trailer