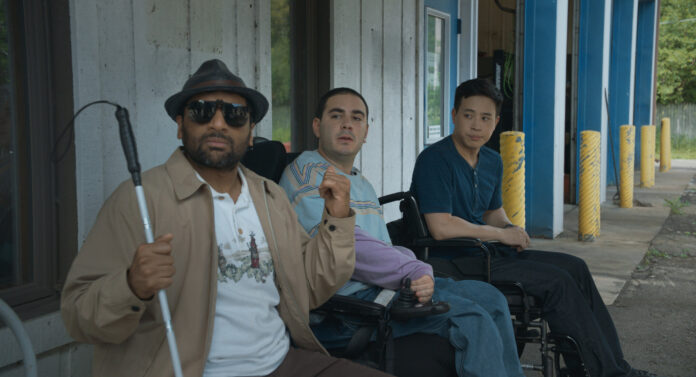 The sex comedy is nothing new. A bunch of guys trying to lose their virginity before some big life event happens has been done a lot. Think pretty much every comedy in the late nineties to early two-thousands. Come As You Are, a new dramedy from Richard Wong takes that concept and tries to transform it into something endearing and more realistic: a road trip comedy about three friends with disabilities traveling to a brothel to lose their virginity.

A remake of the 2011 Belgian film Hasta La Vista, the film follows three young men all with some sort of disability keeping them from having sex. Scotty (Grant Rosenmeyer) suffers from paraplegia and uses a wheelchair. He spends his days in physical therapy and messing with Mo (Ravi Patel, Meet The Patels, Long Shot), a man with severe visual impairment that works at the therapy center. There they both meet Matt (Hayden Szeto, Edge of Seventeen), who just broke up with his girlfriend and uses a wheelchair, his disability evident but not said outright. Scotty, tired of pent up sexual frustration, hears about a brothel in Canada that was made for and by people with disabilities. Intrigued by the concept he slowly convinces his friends to come along on a road trip with him to get laid. They hire Sam (Gabourey Sidibe, Empire, Precious) to drive them and off they go without telling their parents.

This actually happens. Sex, like most other bodily functions, is natural and human and, for many people, needed to feel healthy. In 2016, Vice released a documentary chronicling people with physical disabilities on their quest for sex through sexual surrogates in Vancouver. Shying away from the “prostitutes and brothel” idea into “medically assisted sexuality,” the documentary showed the benefits that this kind of sex work can have on those with disabilities. 2012’s The Sessions starring Helen Hunt and John Hawkes delved into this concept and how sexuality can intersect with disability. Come As You Are’s narrative doesn’t really do that. It plays up the concept of the brothel. Scotty is depicted as a sex-crazed young man, a depiction I might add that many able-bodied characters have encompassed. This doesn’t mean that the film lacks heart, it has plenty of it, it just means that its representation of a sex-positive story is lacking.

The film is not as nuanced as it needs or wants to be. It’s missing the subtly that made its predecessor a hit. It could be the source material doesn’t match up fully with an American sense of humor. It could be the lack of empathy you feel for the characters. Despite this, there are some funny and moving bits within the piece. Janeane Garofalo stands out as Scotty’s mom Liz, who is such a pro at being a mom to Scotty that she’s not fazed by anything and not held back by it either. Ravi Patel is very sweet and hilarious neurotic as the visually impaired Mo. Not everything lines up or pays off in this film, but it’s still worth seeing for its charisma and unique take on the sex comedy.