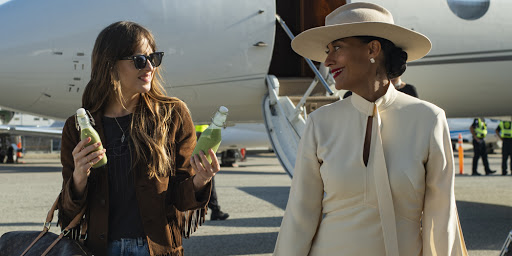 Almost exactly one year after her comedy Late Night was a big festival darling, director Nisha Ganatra returns with another film centered on women in the entertainment industry. The High Note (formerly titled Covers) pairs up Tracee Ellis Ross and Dakota Johnson in a music world comedy about a superstar singer and her personal assistant with dreams of making it big.

The dynamic between Ross and Johnson is pretty similar to that of Emma Thompson and Mindy Kaling in Late Night, with one an already-established star and the younger woman looking for her big break. There’s even a table of dudes who think they know more than the woman who is the actual talent. The usual concerns about being an older woman in a young business are there, and certainly valid, as well as the conflict between creativity and doing what’s proven successful. Are we sure this isn’t from the same writers? No?

The cast is tremendous, however, and hopefully we get to really hear Ross and Johnson let loose vocally. We’ve heard Ross sing before (she IS Diane Ross’ daughter) so we know what she can do, but Johnson has only teased what she can do. They’re joined by Ice Cube, Kelvin Harrison Jr., Zoe Chao, Bill Pullman, Eddie Izzard, and June Diane Raphael.

SYNOPSIS: Set in the dazzling world of the LA music scene comes the story of Grace Davis (Tracee Ellis Ross), a superstar whose talent, and ego, have reached unbelievable heights. Maggie (Dakota Johnson) is Grace’s overworked personal assistant who’s stuck running errands, but still aspires to her childhood dream of becoming a music producer. When Grace’s manager (Ice Cube) presents her with a choice that could alter the course of her career, Maggie and Grace come up with a plan that could change their lives forever.

The Hight Note opens May 8th.