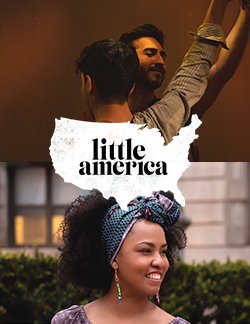 We’re happy to offer our DC readers the chance to attend a free early screening of Applet TV+ series, Little America. The anthology is exec-produced by The Big Sick‘s Kumail Nanjiani and Emily V. Gordon and was recently featured in The Washington Post.

SYNOPSIS: Everyone came here from somewhere else. There were the Pilgrims and the Irish; the Jews and the Puerto Ricans of New York; the refugees from Southeast Asia and the Central American migrants of today. Even Native Americans crossed the Bering Strait some 16,000 years ago. This is the basic American idea — an identity and a country open to all — but it can be easy to forget from inside. And that’s when politics can turn ugly with the rise of a narrative of intolerance about blame and fear. Epic Magazine published a collection of immigrant stores called “Little America” to counter that narrative with a fuller portrait of our most recent arrivals. These were not necessarily classic “immigrant stories,” but rather stories told by immigrants about their lives. This collection of articles is the basis for the show – Little America.


From Executive Producers Lee Eisenberg (Good Boys, SMILF), Kumail Nanjiani and Emily Gordon (The Big Sick) and Alan Yang (Master of None, Forever), Little America is an 8-episode anthology scripted series inspired by true authentic stories of immigrants in the United States. It’s not about telling “immigrant” stories – these are human stories that feature immigrants. The show will cover the full range of human emotion, some will be funny, some tragic, but all will have some sense of hope. Each episode is a standalone with its own unique story.  Over 90% of the writers and directors are either immigrants or the children of immigrants.


The screening takes place tomorrow, February 11th at 7:00pm at Landmark E Street, where free concessions and a photo booth will be made available! If you’d like to attend, simply go to Gofobo site here. Please remember all screenings are first come first served and you will need to arrive early to ensure seating. Enjoy the show!

DC Readers: Attend A Free Virtual Screening Of ‘One Night In Miami’