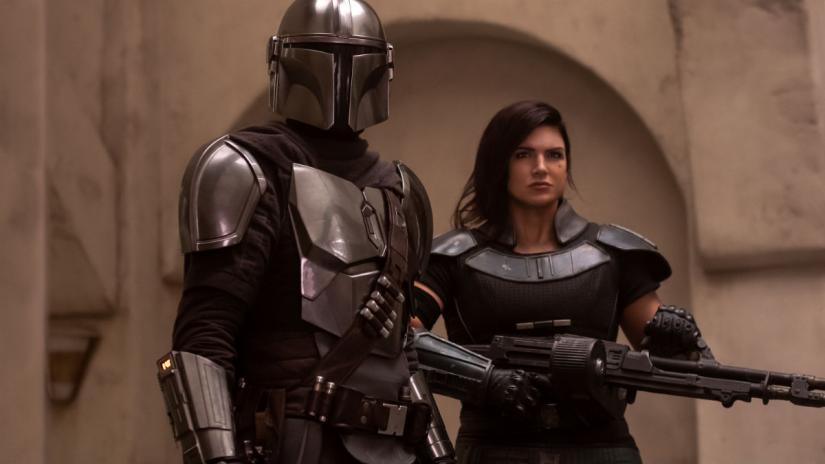 Here we are! The eighth and final episode of The Mandalorian‘s first season, title “Redemption”, is one of the best of the season and sets up an intriguing mission statement for season two.  It’s also one of the most revealing episodes we’ve seen, with many of the biggest questions about Mando brought to light while the character gets some much-needed progression. We also get one Hell of a cliffhanger that opens up even more questions and is sure to have fans of The Clone Wars and Star Wars Rebels buzzing. The fingerprints of co-creator Dave Filoni are all over this one.

That said, the script is by Jon Favreau and the director is Taika Waititi, so there’s a ton of unexpected humor. Things were pretty dire when we last left. Mando (Pedro Pascal), Cara Dune (Gina Carano), and Greef Karga (Carl Weathers) were pinned down by an Imperial army led by Moff Gideon (Giancarlo Esposito), while The Child was sped away by Stormtroopers who had just murdered Kuiil (Nick Nolte). Given that, it throws us off-balance to see this episode begin with so much humor. The two Stormtroopers engage in a silly conversation about The Child, occasionally stopping to bonk the little tyke on its head. Once your blood pressure goes down at hearing Baby Yoda squeal in pain, you’ll be overjoyed at the sight of IG-11 (voiced by Waititi), who shows up and gets them to lower their defense, telling them he is a nurse droid. The incompetent troopers are soon bashed into smithereens, and IG-11 flies off to find the others, the kid all bundled up and safe.

Baby Yoda on a Speeder Bike will be plastered all over t-shirts, stickers, memes…it’s just too cute. 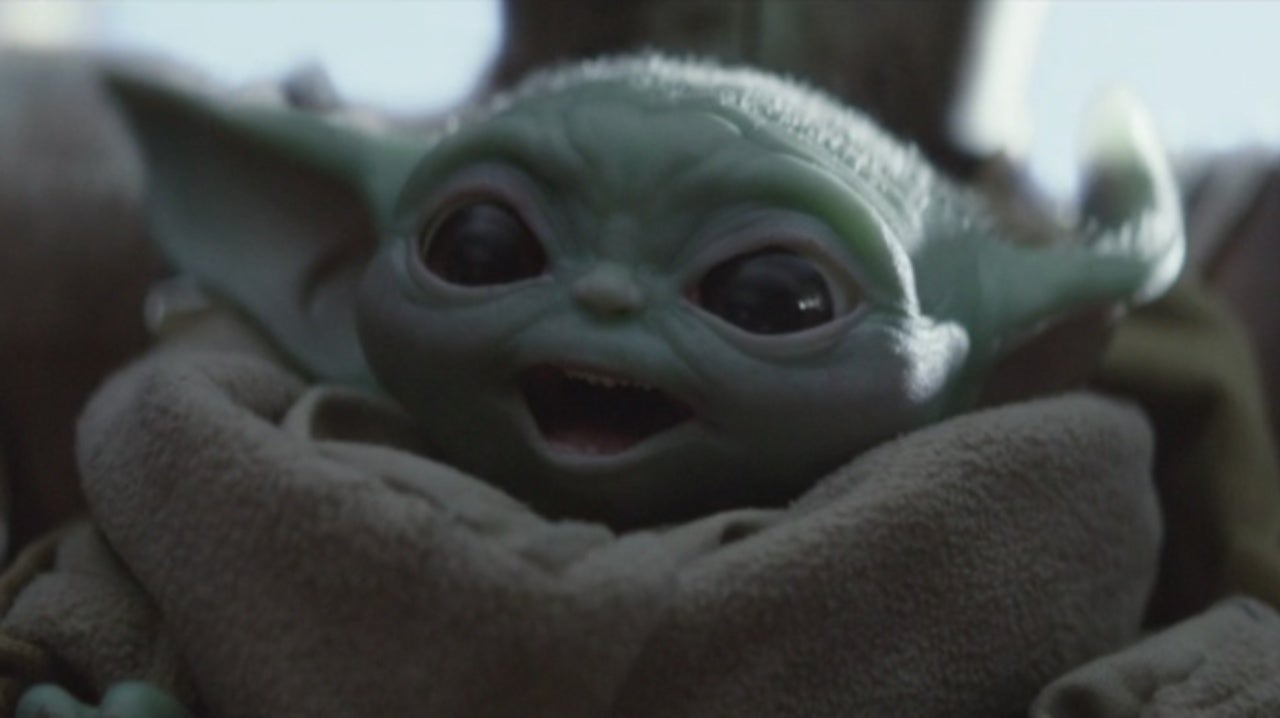 It turns out, IG-11 is extremely crucial to this episode, arguably the star of it. His dual programming, that of a bounty hunter and a nurse droid, compliment one another when we would expect them to be in conflict. Overcoming internal conflicts is what every character has to go through in this aptly-titled episode, with each getting their moment to make a tough decision. Moff Gideon tells us a lot about each of them before IG-11 can arrive. He reveals that he knows Mando’s true name, and no, he’s still not a Fett. He’s Din Djarin, which is exactly what Pedro Pascal told us his name would be. See, he’s not a liar! Gideon also calls out the ex-shocktrooper  Cara “Cynthia” Dune, formerly of Alderaan, which we all know was the home of Princess Leia, as well. As for Greef Kara, well, he’s referred to as a “disgraced magistrate”. No respect.

The trio are all shook up when Gideon’s battalion begins setting up a powerful E-Web cannon, which he said Mando would recognize from watching previous versions decimate scores of Mandalorians. Dune, as a former Imperial officer, also knows of its capabilities. Fortunately for them, IG-11 swoops in and destroys most of the troops, getting an assist from Manda, Cara, and Greef who join in the fighting. However, Gideon coldly steps into the middle of the fight and blasts the E-Web power source, injuring Mando badly.

Right now you’re probably wondering why Baby Yoda doesn’t just do that Jedi healing trick we’ve been seeing so much lately? He can’t, having drained his Force powers stopping a stormtrooper’s flamethrower attack. While the others escape, Mando stays behind believing that he is about to die, and doesn’t want to slow the others down. But it’s IG-11 that comes to the rescue again. He can heal Mando’s wounds, but he’ll have to remove his helmet, something the Mandalorian warrior is reluctant to do because no living creature has seen his face since taking the oath. Of course, IG-11 isn’t actually alive.

“You have suffered damage to your central processing unit,” IG-11 jokes.

“You mean my brain?”, Mando replies.

This is the first time we see Pedro Pascal’s face on the show. The man Din Djarin is a bloody mess, ready to throw in the towel. But IG-11 comes through with the bacta spray that gets him back on his feet. Shortly thereafter, the team find their way back to the Mandalorian sanctuary, where we get our next shocking moment. A pile of discarded Mandalorian armor, proving that many of Mando’s people have died since they came to his rescue in Episode 3. The Armorer (Emily Swallow) is still there, however, repurposing their armor for future use, “For the Foundlings”. We learn why that’s been so important to them all of this time.

The Mandalorians aren’t a race, but a creed. Flashbacks show the full brunt of the Imperial attack that orphaned Mando as a child. He’s rescued from certain death by the Fighting Squad, a group of Mandalorians who take him in as one of their own. The foundlings are literally how the Mandalorian creed is sustained, which is why Mando and the Armorer work so hard to maintain their ways. The Armorer chooses not to flee with the others, but to stay behind and fight until the end.

If there was some concern this season had lost its focus, something happens that sets up an exciting premise for season two. The Armorer tells Mando’s mission is to protect Baby Yoda. She mentions the Jedi after hearing of the Child’s abilities with the Force, and says that Mando’s new purpose is to train the baby as a foundling, before reuniting him with the missing Jedi. She marks Mando with a new signal, signifying he is now part of a “clan of two” with Baby Yoda, the two having saved one another on numerous occasions.

Of course, the Jedi are practically nonexistent at this point in Star Wars history, so finding them won’t be an easy task. But they aren’t completely gone, and that should make things very interesting if one is ever encountered. Making their escape through an underground lava flow, Mando and the team see their exit blocked by Stormtroopers. There’s no way to get through, so once again IG-11 comes through in the clutch. Given that his core programming is to ensure Baby Yoda’s safety, it volunteers to self-detonate and clear a path, much to Mando’s sadness.  It is the first time we’ve seen Mando show any emotion other than hatred for a droid, showing a clear evolution from those early episodes.

On the way out, they are stopped one last time by Moff Gideon, attacking from the air in his Tie Fighter.  He doesn’t prove to be that big of a deal, though. Using his newly-acquired jet pack, Mando latches on to the Tie and drops a perfectly placed bomb, detonating the ship. We’re not stupid, though. It doesn’t blow up nearly enough for Gideon to be dead. Plus, Giancarlo Esposito characters never die that easy. Cara decides she’s going to stay there on Navarro, while Greef tries to convince her to join the Bounty Hunters’ Guild, or act as his enforcer. Mando and Baby Yoda fly off into parts unknown, in search of Jedi who are largely believed to be a myth.

If that were all, it would already be an incredibly jam-packed episode. But moments later, a handful of scavenging Jawas flee in shock as Moff Gideon cuts his way out of the ship using the Darksaber! As he was cutting, I was slack-jawed wondering if I was seeing what I thought I was seeing. But that is definitely it, the ancient Mandalorian weapon known as the Darksaber. How did Gideon get his hands on it? And why is Dave Filoni messing with us like this??? I need answers! 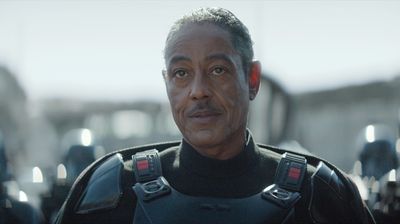 I wasn’t sure if Jon Favreau and Co. could stick the landing, but they definitely did. The Mandalorian wraps up its first season on a high, wrapping up numerous plot points, fleshing out its wonderful supporting cast, and setting on a course that makes us want season 2 right now. Complaints about the meandering nature of Baby Yoda’s story have been quieted for the moment, and the series finds renewed purpose. I’m curious how deep into Mandalorian culture they’re going to get, but the introduction of the Darksaber, which has its on-screen origins in The Clone Wars and Star Wars Rebels, suggests we’re going to get very deep in the weeds and I can’t wait.

Overall, there wasn’t a single episode this season I found to be outright bad. Some lagged more than others, but for the most part I found The Mandalorian to be the most enjoyable Star Wars project this year. If the future Disney+ shows (Caspian Andor, Obi-Wan Kenobi) are this good, perhaps there will be less of a need to rush into another movie?