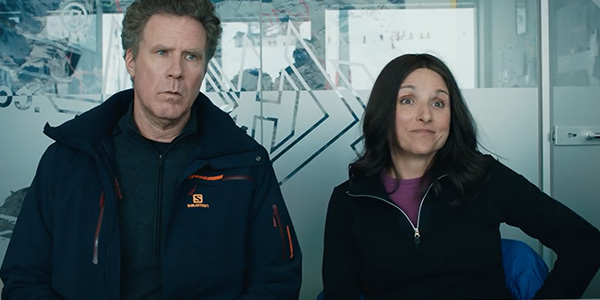 Will Ferrell and Julia Louis-Dreyfus get snowed under in a big way in the first trailer for Downhill. This is the American remake of the critically-acclaimed Swedish comedy Force Majeur, a Cannes award-winner and Golden Globe nominee in 2014.

Unlike some other foreign films, the relationship story it tells is pretty easy for American audiences to relate with. Ferrell and Louis-Dreyfus are a married couple on a family ski vacation in the Alps. When an avalanche threatens to bury them all, Ferrell looks to save himself while his family is left behind. In the aftermath, both spouses are forced to reevaluate how they truly feel about one another.

Ferrell is perfect at playing the kind of wishy-washy character this story demands. I can’t wait.

The film is written and directed by Nat Faxon and Jim Rash, Oscar winners for writing The Descendants. They co-wrote the script with Succession creator Jesse Armstrong. Also in the cast are Zach Woods, Miranda Otto, Zoe Chao, and Game of Thrones favorite Kristofer Hivju.

Downhill is going to be one of the biggest films at Sundance next month. It’ll then go on to hit theaters on Valentine’s Day.