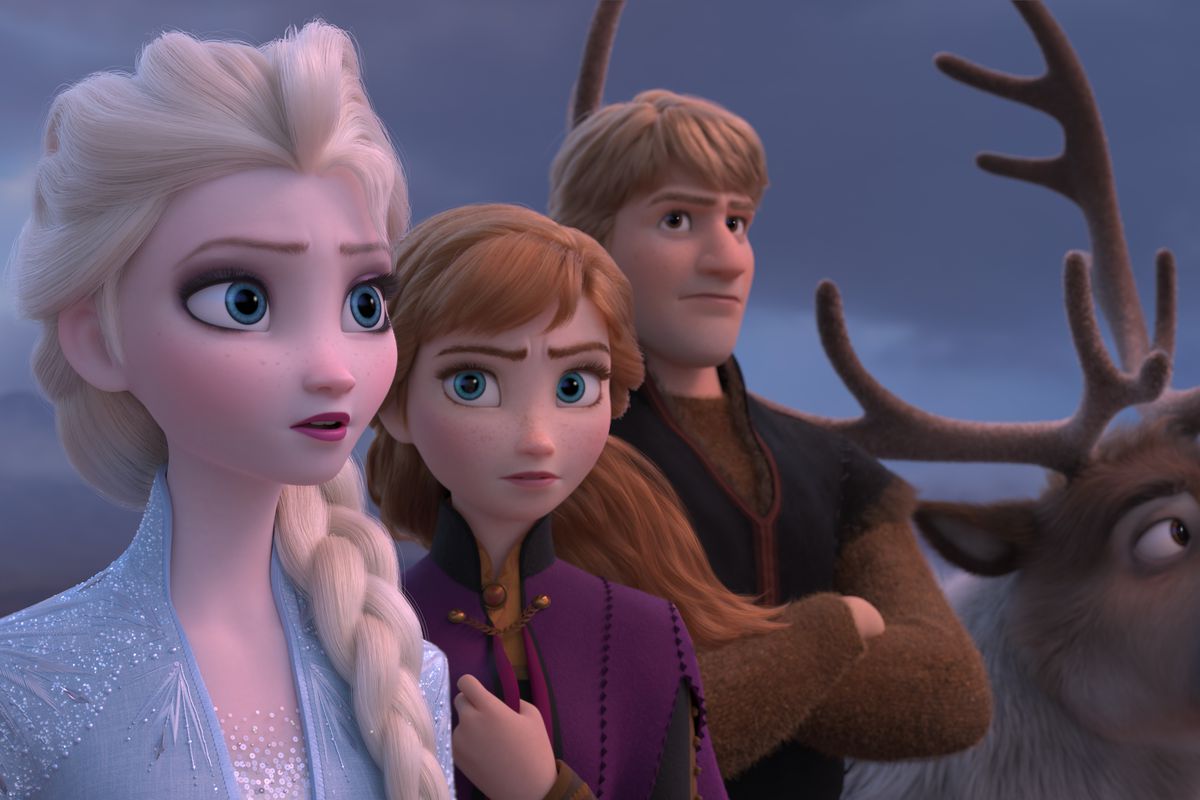 Maybe it was all a clever ruse on Disney’s part, but the first big musical number in Frozen 2, the one they’ve been teasing since last summer, “Some Things Never Change”, couldn’t be less indicative of the anticipated sequel. While all of the core characters return for what will surely be another massive cultural touchstone and merchandising dynamo for the Mouse House, the truth is that this movie offers something different, an evolution on an emotional and visual front that makes for an enchanting, satisfying tale.

Set three years after the last film, Frozen 2 picks up with things looking pretty much the same. The kingdom of Arendelle is watched over by Queen Elsa (Idina Menzel), whose magical ice powers keep them protected at all times. Her sister Anna (Kristen Bell) is still involved with Kristoff (Jonathan Groff), who is more smitten with her than ever. Their frosty snowman pal Olaf (Josh Gad) is still around, too, now made of permafrost and experiencing a bout of existentialism. Just as Elsa keeps watch over Arendelle, Anna is there to do the same for Elsa, who despite coming into her own in the last film (Wasn’t that the point of all that “Let It Go” stuff?) still battles with her self-confidence.

The harmonious mood is broken by a siren call that only Elsa can hear, one that places all of Arendelle in danger. The voice leads Elsa and her friends to a veiled, enchanted forest full of dark mysteries, nature’s most powerful elements come-to-life, and long-hidden truths about Elsa she may not be prepared to learn.

Directed once again by Chris Buck and Jennifer Lee, the latter also having written the script solo, Frozen 2 makes the long 6-year wait for a sequel worth it with a story mature enough to keep up with the older audience. That’s not to say there isn’t plenty for magical creatures and snowy landscapes for the kids to enjoy. At our screening you could barely go a minute without hearing them squeal with delight over some fantastical development, one of Olaf’s goofy predicaments, or Elsa’s many…MANY shimmering outfits. So….many…outfits.

But this is a story centered on personal growth, with much of it focused on Elsa and the origin of her icy powers. To that end, it gets pretty grim and ventures into territory that may be too much for younger children to handle. In keeping with the film’s message of transformation, everyone has their cross to bear and nobody emerges unchanged. Even Olaf, who has taken to ruminating on questions far too complex for your average snowman, has a moment that will make you see him as more than just comic relief. Because there is no central nemesis to be fought, the struggle is mostly internal and, the character development a crucial component. Visually, Frozen 2 has undergone a shift, as well. While the glowing whites and blues are still there, large swaths of the film are draped in autumnal reds and oranges, giving the sequel an entirely fresh, evocative look. We’ve gotten so accustomed to the beauty of Disney animation that we don’t expect to see anything new, but this may be the most stunning work we’ve seen from them yet.

The previous film leaned hard on its strong message of female empowerment and diversity, which I think is a big reason why it touched the hearts of so many. Those ideas aren’t necessarily gone in Frozen 2, but are definitely toned down in favor of establishing a larger mythology full of living elements (Be prepared for a cute little fire elemental), rock monsters, clandestine tribes, and a horse made out of seawater. The story beyond each character’s personal journey is pretty thin, however; a shame because so much of it has potential. For instance, we don’t get nearly enough from Sterling K. Brown as a soldier whose backstory crosses with Elsa and Anna’s in an unexpected way. That particular plot point is one of many (What’s the point of the elementals, anyway?) that could’ve used a greater fleshing out by Lee’s screenplay.

While the emergence of “Let It Go” made an idiot of me for thinking all of Frozen‘s songs pretty forgettable, I don’t think there’s going to be the same kind of breakout track, this time. The much-talked-about “Into the Unknown” certainly shows off Menzel’s powerful range once again but lacks the same impact. On the other hand, Kristoff’s power ballad “Lost in the Woods” will have parents laughing out loud to its cheesy ’80s music video aesthetic.

Disney easily could’ve taken an “if it ain’t broke” approach and come away with another $1B hit. But in taking a little more time and daring to go in a surprising new direction, Frozen 2 proves it doesn’t need to recapture the magic of the original when it can create its own.