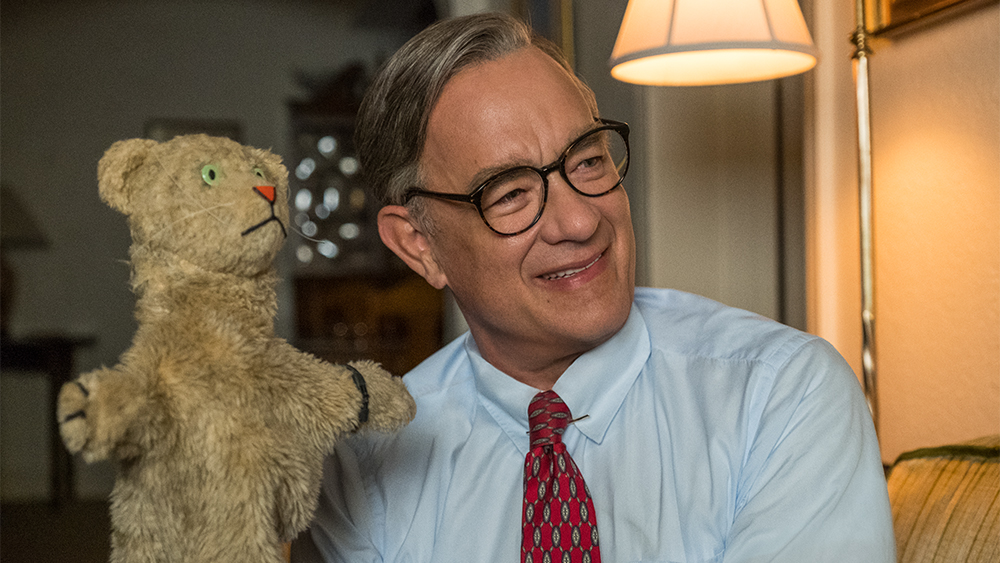 The biggest challenge is finding someone who can be Mister Rogers.  Not many people can embody his calming presence, his kindness and spirit, without it seeming like a facade. Who better than Tom Hanks, whose soothing, patriarchal presence has been watching over us for years on the big screen. With Hanks, A Beautiful Day in the Neighborhood has its guiding light, steering what could’ve been a cliche story about the transformation of a disgruntled, cynical reporter into something truly magical and life-affirming.

Director Marielle Heller’s brilliant third feature is unique in that it’s designed not to make you feel a certain way about Mister Rogers, or spark nostalgic memories of watching his program as a child, but to examine what someone like him can mean to you right now. As an adult, facing a world of adult problem we may not be emotionally prepared to handle. Do we treat someone with Rogers’ kindness and patience with dismissiveness and distrust, or do we allow them into our hearts?

To achieve this monumental goal, Heller frames the entire film like an episode of Mister Rogers’ Neighborhood. Hanks in Rogers’ familiar red sweater, merrily singing his trailblazing show’s opener directly to us, his audience. And like the millions of children who sat in rapt silence watching, we too are captivated by Mister Rogers’ every word.  It’s through his instructional picture board that we are introduced to jaded Esquire magazine writer Lloyd Vogel, played by Matthew Rhys and based on journalist Tom Junod, who wrote the incredible article “Can You Say…Hero?” that profiled Rogers.  Lloyd, an aggressive investigative journalist with a reputation for pushing too hard, has been assigned to do a 400-word puff piece on Mister Rogers, an assignment he does not want. But if he’s going to do it, he’s going to go into the same way he does every interview, which is assuming the worst about his subject.

I have to admit, I used to have the same feelings about Fred Rogers going into the excellent documentary Won’t You Be My Neighbor, thinking it would reveal some unsavory element to this paragon of virtue, this idol to so many. Lloyd’s doubt is understandable, but a response to the resentment and anger he has over the return of an absent father (played by Chris Cooper), and the fear he has at becoming a new parent. As Rogers makes clear at one key scene in the film, his goal is to try and teach kids how to deal with their feelings in a positive way, and not respond with rage. For Lloyd, he’s finding it hard not to react in an aggressive manner to Rogers’ deliberate, passive demeanor.  He’s not someone who answers questions willingly; he wants to listen. Rogers almost never answers a direct question in all of his interviews with Lloyd, he hears what is said and let’s the words linger.

Far from a typical biopic, A Beautiful Day in the Neighborhood finds Heller and screenwriters Micah Fitzerman-Blue and Noah Harpster taking some bold stylistic risks. This very easily could’ve been just another docudrama told in point-to-point fashion, skating by on Hanks’ crowd-pleasing performance.  There’s nothing safe in the gradual pacing, the story’s inherent sweetness, or the commitment of so much dramatic heft to Lloyd’s story. But this really is a movie just as much about Lloyd as it is Fred Rogers, if not more so, and nothing suffers as a result. The breaking down of his emotional armor is powerful and worth investing in, with revelations emerging in ways that are well-earned.

There’s vulnerability and dignity in Hanks’ portrayal of Rogers, a man many still see as a saint put here on Earth.  Hanks’ performance is a carefully calibrated thing. There’s strength in his gentleness, and meaning in his mannerisms. Nothing Rogers ever does goes go waste; it’s all in service of helping others be the best version of themselves possible.  When Rogers casually shows Lloyd sign language for the word “friend”, he knows it’s what Lloyd needs to hear, even if he doesn’t know it yet.  It’s uncanny how easily Hanks captures the essence of who Fred Rogers is, grasping our attention in a minute-long silence of remembrance to “all the people who loved you into being.” It may sound corny as Hell, but as Rogers breaks the 4th wall and peers directly into your eyes, I defy you not to be gripped by it and to find appreciation for the people in your life who matter.

A Beautiful Day in the Neighborhood can’t escape the conventional aspects of Lloyd’s story. And for those familiar with Mister Rogers there will be little in the way of new perspectives. That’s fine because the one view of who Fred Rogers was will more than suffice, and the world could use more people like him who see the potential for good in everyone.