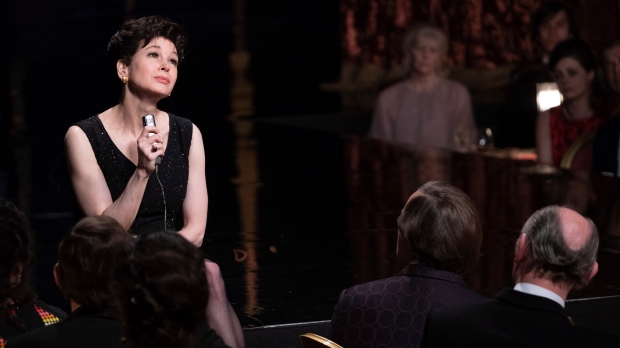 Rupert Goold’s Judy smartly begins in the place most of us will always remember Judy Garland best, on the MGM lot under the technicolor glow of The Wizard of Oz set. As she strolls along the familiar yellow brick road, with young actress Darci Shaw capturing Garland’s wide-eyed fear and awe at the enormity of it, we can’t help but feel the ominous mood set by studio chief Louis B. Mayer. As they walk through the iconic set, Mayer systematically breaks the overmatched girl down; criticizing her physical features and vaguely threatening to replace her with someone else (Shirley Temple’s name is dropped like a grenade with a half-pulled pin), leaving the girl to be lost to the outside world and forgotten.

These flashbacks are both the most disturbing and some of the most effective aspects of Goold’s generic biopic on the final weeks for legendary actress Judy Garland, painting a picture of the abuse that would color her self-destructive ways as an adult. But don’t take that to mean other aspects of the film are merely average. Rising above the paint-by-numbers approach favored by Goold is the immaculate performance by Renee Zellweger, who takes this movie by the throat the moment she first takes the stage.

It’s unfortunate it takes nearly an hour of dreary melodrama for us to reach that triumphant moment, however. Goold and screenwriter Tom Edge’s adaptation of Peter Quilter’s stageplay depict Garland as a broken butterfly, a jumble of nerves and insecurities emboldened by drink, smoke, and prescription drugs. Her reputation as a troublesome, uninsurable actress has destroyed her career but has bled into her personal life, where she battles ex-husband Sidney Luft (Rufus Sewell) for custody of their two children. She carries the kids around like luggage while performing gigs well beneath her talent, but literally can’t afford to keep it up for long. These scenes are raced through briskly, as if in a hurry to get to the real action, which is Garland’s sold out tour in London.

It’s in London where Judy really takes off, and Zellweger gets to show her mettle in a juicy role the likes of which she hasn’t had in ages. Still considered a megastar across the pond, Garland accepts a series of shows at London’s prestigious Talk of the Town nightclub, where the embattled 46-year-old will be the headliner. There, under the watchful eye of producer Bernand Delfont (Michael Gambon) and assistant Rosalyn Wilder (played by Wild Rose‘s Jessie Buckley, sadly with no chance to sing), Garland shows herself to be a true entertainer born-and-bred, energizing crowds despite a loss of her vocal range. At the same time, the hectic demands of it only fuel her personal demons, angering not only her benefactor but fans who paid to see her. Basically, it was a crapshoot. You might get amazing Judy Garland, or falling down drunk Judy Garland who gets replaced by skiffle singer Lonnie Donegan.

Zellweger doesn’t naturally look like Garland, although the hair and makeup team do a damn fine job of coming close. What she does is capture Garland’s spirit, which despite taking a number of heavy shots in life always had a glimmer of light to it. She could be funny, mostly making fun of herself, and always seemed to be looking for her own treasure at the end of the rainbow. When she meets fifth and final husband Mickey Deans (Finn Wittrock) at a party, she leaps at the chance to find some measure of happiness. At the same time, you can see Garland’s troubled, abusive history on her face and in her physical movements. Zellweger never portrays her as a victim, however, just someone who knows all too well the dangers that come with her chosen profession, which she dearly loves.  But it’s when Zellweger takes the stage that we see just how gifted the actress really can be. Her rendition of Garland’s “Come Rain or Come Shine” is a rousing piece, and her “Somewhere Over the Rainbow” is surprisingly powerful. Of course, Zellweger’s voice isn’t anything like Garland’s, but it doesn’t have to be. She carries herself with confidence in portraying the aging Garland at her best and at her worst, which is no easy feat.

There are opportunities missed in the dull portrayal of her relationship with Deans, and a scene with Garland’s daughter Liza Minnelli (played by Gemma-Leah Devereux) feels like it was mandated. But there is at least one surprising highlight in the relationship Garland forms with a gay couple who happen to be her biggest fans. Always considered a counterculture icon, especially among the LGBTQ community, Garland’s interactions with the pair provide some of the movie’s funniest and touching moments. Whether anything like the pair’s failed attempt at cooking her dinner ever happened, it’s intriguing enough to possibly stand on its own as a separate production.

Judy goes out with an abundance of sentimentality, but it’s somewhat fitting for a star who evoked such strong reactions throughout her career. I don’t know if that’s something you could say about Zellweger in recent years. Like Garland, she has had her own run-ins with Hollywood and the press, retreating from the spotlight for a period of time. That time is now over and the spotlight is back on Zellweger in a big way. Judy may be too small for Judy Garland’s enormous life, but Zellweger more than rises to the occasion.