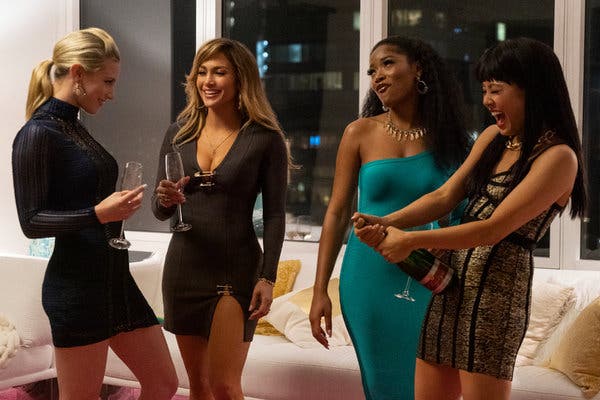 A few years ago audiences were hooked by Channing Tatum’s abs to pay for Magic Mike, only to discover it wasn’t just two hours of riding the pony of half-naked men. It was a movie that Steven Soderbergh actually wanted to be about something. The big draw for Lorene Scafaria’s Hustlers has been similar, with promises of J-Lo, Constance Wu, Cardi B, and Lizzo splayed out on stage or spinning on the stripper pole under a thundercloud of dollar bills. If that’s what you came to Hustlers for, then you’ll get what you paid to see and it’s as sexy as advertised. However, the movie wants to be about so much more, and doesn’t always come off looking like a high-roller.

Based on a New York Magazine article by Jessica Pressler (Julia Stiles playing her analog in the film), Hustlers is pretty easy to sum up. It’s about a group of exotic dancers at a high-end strip club which has fallen on hard times after the 2008 financial crisis. All of the Wall Street fat cats who kept the ladies in diamonds and furs are gone, jobs have been lost, clubs shut down, and worse. Some of the women come up with a get-rich/get-even scheme to fleece the few whales they can find, but of course, nothing stays great forever, especially when money is involved.

Wu, in a fairly big transition from Crazy Rich Asians, plays the aptly-named Destiny, a new girl at Moves, a luxurious nightclub based on Scores, which I’m guessing had its name changed here to avoid legal repercussions. Destiny’s got it rough; she’s not fitting in with the other girls, she’s still a novice at dancing, and she’s not making enough money to help pay her ailing grandmother’s bills. But all of that changes when she meets the fierce, stylish, Ramona (Lopez), who has all of the men eating out of the palm of her hand, or better put, stuffing money into her gear.

If you were wondering whether J-Lo’s still got it, she definitely does. I’m not sure it ever really left, and the desire to write her off is somewhat baffling. She’s a true superstar, a multi-talented one at that, and Scafaria knows how to show off her assets as well as her dramatic skills. Money literally pours from the sky whenever Lopez flashes her famous rear, but she also brings some added depth to Ramona that the other girls just don’t get. The matriarchal/opportunistic Ramona takes Destiny under her wing, seeing a gorgeous Asian girl (Asians are a rare breed) who should be making a lot more money. After showing the young upstart some new moves, aided by a game Cardi B in an all-too-brief performance, Ramona and Destiny start working their clients for every penny. Together, they start making serious bank. Destiny has the money and independence she’s always wanted, until an unplanned pregnancy takes her away from the business and Ramona for a few years.

The impact of the Wall Street collapse is felt in the changing of the nightclub business. Ramona is barely squeaking by, most of the girls have moved on to real jobs, and the club is a ghost town. It’s worse for Destiny who is back on her own with a daughter to support, but when she reconnects with Ramona it’s like nothing changed. With so few customers they come up with a different type of hustle, a dangerous one (joined by scene-stealers Keke Palmer and Lili Reinhart), that will have them back living the high-life in no time.

The real hustle in Hustlers is that it’s a movie about friendship, one that would’ve existed, perhaps even thrived, without the central crimes that inevitably take over. Scafaria pretties it all up with fancy shopping trips and sexy dance moves, but basically this is the story of two women who will do anything to stay in control of their own lives and not rely on men, who are all portrayed as rowdy Wolf of Wall Street wannabes. But whether Hustlers is actually a female empowerment story, that much doesn’t really ring true. Nor does any attempt to equate the criminal activities of Ramona’s crew with the white collar crimes of their clientele, heard in a hollow call-to-arms at a local diner. What they end up doing isn’t about revenge, but solely about greed, and all of their sob stories don’t make them worth cheering on.

Fortunately, movies about bad people are often more entertaining, and Hustlers is flashy, funny, and fast-paced enough to always be that. Scafaria doesn’t do much but retell the story as it happened and leave it to Lopez to be the showstopper. Turns out she’s more than up to the task.