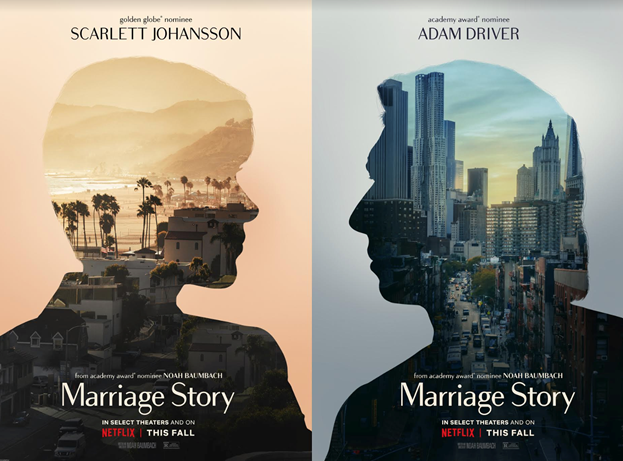 Similar to The Disappearance of Eleanor Rigby, which told both sides of a crumbling relationship, Noah Baumbach’s Marriage Story will explore a difficult divorce from all sides. The film stars Adam Driver as Charlie, a stage director, and Scarlett Johansson as Nicole, an actress, who are in the process of a coast-to-coast divorce with their young son caught in the middle.

Baumbach brings something personal to pretty much every movie he makes, but it’s especially true here. In a previous interview he admitted to drawing on his own experience with divorce from actress Jennifer Jason Leigh shortly after the birth of their child. So while it would be easy to cite a classic divorce movie like Kramer vs. Kramer, Baumbach is drawing from a much deeper well than that.

To reflect that both sides of the divorce will be shown, Netflix has released companion trailers for the film, as well as dual posters. They’re accompanied by this statement by Baumbach:

“MARRIAGE STORY is a love story that reveals itself within the breakdown. With these companion trailers, I wanted to show the relationship through the eyes of both characters. There are many sides to every story, and the movie embraces these different viewpoints in order to find the shared truth.”