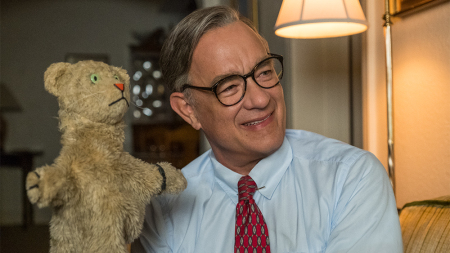 When Tom Hanks was cast as children’s TV host Fred Rogers in A Beautiful Day in the Neighborhood, it looked like a perfect match. Rogers, the imminently likable host of Mr. Rogers’ Neighborhood, and Hanks, one of the most beloved actors of any generation. What could go wrong? Judging by this new trailer, absolutely nothing, as Hanks seems to have fit into the role with genuine ease.

The film also boasts an interesting pairing of director with the material. Marielle Heller is coming off her acclaimed drama Can You Ever Forgive Me, in which she helped turn literary scam artist Lee Israel into a sympathetic figure. The task of making Rogers someone to root for should be an easy one, and I think any cynicism is matched by the movie’s storyline in which Matthew Rhys plays a cynical journalist doing a profile on Rogers. While he’s doubtful Rogers’ nice guy routine is for real, you can bet his cold heart will be warmed by the end of the story.

SYNOPSIS: A timely story of kindness triumphing over cynicism, based on the true story of a real-life friendship between Fred Rogers and journalist Tom Junod. After a jaded magazine writer is assigned a profile of Fred Rogers, he overcomes his skepticism, learning about empathy, kindness, and decency from America’s most beloved neighbor.


A Beautiful Day in the Neighborhood opens November 22nd.