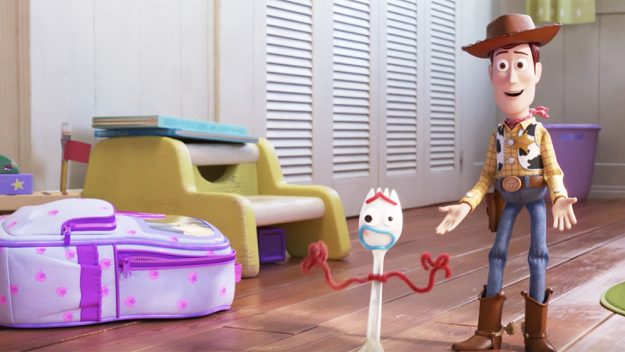 We should probably learn to always trust Pixar at this point.

Nine years after Toy Story 3 wrapped up with what we believed was the perfect ending to their nostalgic trilogy, Toy Story 4 arrives with both anticipation and some worry. What more could there possibly be to say about our favorite toys Woody (Tom Hanks), Buzz Lightyear (Tim Allen), and the rest of the gang? Hasn’t Pixar helped us find our inner child in every possible way imaginable, with nothing left to add?

Toy Story 4 isn’t just another sequel, though. It’s a perfectly beautiful, meaningful coda that opens up new possibilities, begins new chapters, and teaches that there is always something to look forward to. Even for a bunch of old toys the story never really comes to an end. While Toy Story 3 may have been a perfect finale that left us all drowning in our own tears, the latest chapter rekindles our child-like spirit with a funny and poignant adventure fit for all ages. We may have boxed up the old toys but for them and for us, the story is never really over. It just changes.

Perhaps more than any other Toy Story movie, this one focuses on Woody who is struggling to adjust to life with his new kid, Bonnie, who received all of the toys passed down by Andy. As Woody needs to be reminded, the two kids aren’t the same, and it isn’t long before Bonnie finds new favorites to play with. While he may be feeling left out, Woody’s loyalty to his kid remains stalwart, taking up the role of protector to her new favorite toy, the handmade Forky (Tony Hale), a modified spork who sees himself only as trash. When Forky gets separated from the group while on a family road trip, Woody sets out to bring him back because of his importance to Bonnie.

I don’t know if anybody does emotional prologues and epilogues like Pixar, and Toy Story 4‘s bookended scenes will leave you a whimpering mess. This one starts with an explanation for the disappearance of Bo Peep (Annie Potts), Woody’s close friend and love interest. The two reconnect as he’s out in the wild, finding that she’s been living the life of freedom vastly different from his domestication. Woody’s quest also finds him encountering other crazy new characters. Keanu Reeves’ Canadian stuntman Duke Caboom is a riot (signature catchphrases galore), while Keegan-Michael Key and Jordan Peele’s stuffed carnival toys Ducky and Bunny have a couple of terrific scenes in which they come up with maddeningly disruptive schemes. The most poignant of the new additions is Gabby Gabby, voiced by a scary Christina Hendricks, whose turmoil mirrors Woody’s in that she longs to be a loved toy, but her desperation has become something ugly.

It’s amazing how much evolution we get from Toy Story 4, with virtually every character entering some different phase of their existence. While Buzz seems like more of a peripheral character than ever, he also must learn to find his own voice and be more than just Woody’s sidekick. Bo Peep has undergone the greatest change of all, with her experiences in the great wide world turning her into a badass who can fend for herself. Of course, it’s more rewarding to fight for others, something Woody has been doing since the very beginning.

Marking the directorial debut by Pixar veteran Josh Cooley, Toy Story 4 delves into a world within worlds. There aren’t a ton of locations but we go so deep inside them it’s like entering multiple alternate universes. An old antiques shop glimmers with rainbow beauty one moment, but just as quickly becomes a cavernous maze of horrors with threats that could be a bit much for younger kids and adults, too. These movies are nerve-racking as Hell. That we get so wrapped up in the well-being of a bunch of toys goes to show how humanity Pixar has been able to give these wonderful characters. Despite a veritable army of Pixar vets cooking up the story (along with actress Rashida Jones at an early stage), the focus remains tight, the laughs frequent, and the toys you love always treated with the proper care.  There are a few too many toys, though, and it gets so crowded as to be hard to navigate what’s going on. While they did provide a couple of good laughs, Ducky and Bunny don’t have the same emotional impact as everyone else and they feel out-of-place as a result.

More than almost any other franchise I can think of, Toy Story has truly grown with its audience. Pixar keeps finding new ways to tap into our childhoods while maturing along with us. With Toy Story 4, this beloved group of characters we’ve grown to love get to do some maturing of their own.