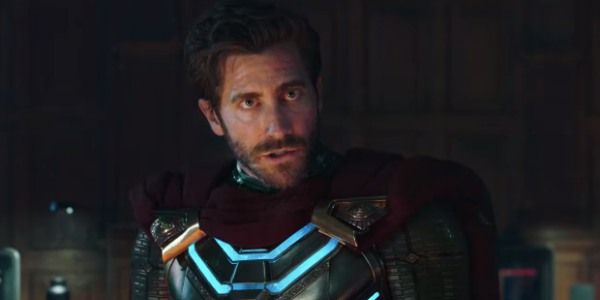 The most recent trailer for Spider-Man: Far from Home was quite revelatory, surprisingly so if you ask me. While we always knew it would be spoiler heavy, which is why we were warned about Tom Holland’s spoiler warning for Avengers: Endgame that preceded it, but the real shock is how much was given away about the current state of the Marvel Universe. In short, there’s no longer just one timeline out there. The Multiverse exists, and Jake Gyllenhaal’s character Quentin Beck aka Mysterio is from an alternate Earth.

Damn, Cap! You staty behind in the 1940s and everything gets all fucked up.

Actually, it’s more likely the many uses of the Infinity Gauntlet tore a hole in the fabric of time and space, but whatever the cause this is where things are now as explained by Mysterio himself in the latest clip.  Beck goes on to explain he’s from Earth-833, while the current one is Earth-616, which fans of Marvel Comics will recognize as that universe’s designation. Earth-833 actually belongs to the U.K. version of Spider-Man, not that you need to know all of that.

A new clip from SPIDER-MAN: FAR FROM HOME has been released, showing Peter Parker and Mysterio meeting for the first time. ?#SpiderManFarFromHome pic.twitter.com/e9W1uQlmT5

So this is all really cool and opens up a wealth of storyline possibilities. It could also get so wonky casual viewers get turned off, which leads me to my one big question: Is the Multiverse actually a thing? Even though Mysterio is shown to be on the side of good in every piece of footage so far, we know him as a villain and a liar who uses tricks to manipulate people. He’s here on Earth to battle the powerful Elementals, but does anybody believe he’s not involved with them somehow? Or that he’ll eventually turn on Spider-Man when it serves his purpose to do so? Is it possible Mysterio has totally made up the idea of a Multiverse to give himself some credibility and better position himself as a hero?

In a recent interview with Fandango, producer Eric Hauserman Carroll is already comparing the relationship between Peter and Quentin to that of Dr. Strange and Baron Mordo. We saw how that turned out…

“Similar to what we did with Mordo in ‘Doctor Strange,’ we wanted to give [Peter and Quentin] time to have a relationship so that when, if we get into doing something different with Mysterio, it really feels like a betrayal. Not unlike Chiwetel [Ejiofor], we’ve got this amazing actor, we really want to do something interesting with him, we think we have this fun new in for it and we’re hopefully setting the stage for something really spectacular and which feels really Spider-Man. Again, if we get to something else with this character, they’ve already got this really personal relationship.”


I think we’re going to find out that Mysterio is a fraud of Mandarin-level proportions. What do you think?  Spider-Man: Far from Home opens July 5th.