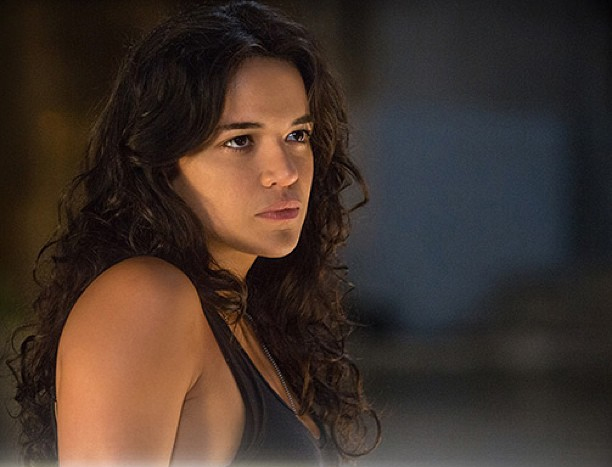 The Fast & Furious franchise, at least the ninth movie, will be getting a shot of estrogen. You may recall a couple of years ago, not long after her return to the blockbuster action flicks, Michelle Rodriguez openly complained about the poor treatment of the female characters, and even threatened not to come back. Vin Diesel promised to repair the situation and seemed to smooth things over with Rodriguez. But now she’s truly getting what she wants for the upcoming movie.

According to Bloomberg, Rodriguez has agreed to return for Fast 9 (or whatever they’ll call it), but only because a female writer will be hired to work on the script. It’s unclear who this writer will be or how much input she’ll have, but it was enough to get Rodriguez signed on, so it must be substantial.

“I felt like there was not enough of a female voice in the franchise,” Rodriguez said. “You should evolve with the times, not just pander to certain demographics that are stuck” in the past.

This also comes after Diesel revealed he had hired a number of women to pen an all-female spinoff. While we don’t know if Rodriguez’s character Letty Ortiz will be a part of that, or maybe even Charlize Theron’s villain Cipher, it’s probably a good bet.

So it seems women won’t just be arm candy and window dressing, there to stand around in bikinis signaling the start of street races. Fast 9 is set to open on May 20th 2020.