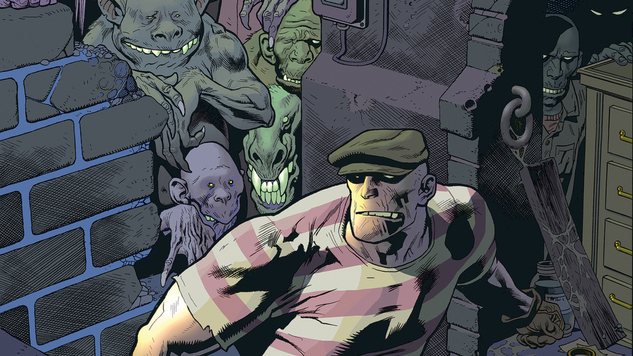 David Fincher and Deadpool director Tim Miller have been trying to mount an adaptation of Eric Powell’s comic, The Goon, nearly as long as this site has been around. I know, because I pitched in for their Kickstarter effort at one point and have been receiving irregular updates ever since. Well, there’s finally some good news on that front, because it looks as if the animated film has found its footing again, this time over at Disney-owned Fox.

According to the most recent Kickstarter update, The Goon is officially in development at Fox. To be fair, this update sounds a lot like ALL of them, which were wildly positive and made you feel as if the money you chipped in wasn’t going to waste. But no matter how good the news, nothing ever went anywhere. So what makes this time any different?

The post notes the $441K raised by the Kickstarter was instrumental to this next step, and bringing on producers The Chernin Group who have completed some high-profile projects in the past.

“With your generous contributions, we were able to finish a full storyboard animatic of the film, complete with amazing voice acting, sound design, and music. This template for the film sold the producers and studio on the potential of THE GOON and we’re beginning a new round of development.”


“It’s The Chernin Group and they’ve brought us movies such as the PLANET OF THE APES franchise, RED SPARROW and OBLIVION.  They love the project and we’re all excited about this next phase and continues the collaboration with the fabulous Eric Powell, David Fincher, and all the folks at Blur Studio.”


So my $10 didn’t just go into Fincher’s wallet? That gives me some relief.

For those who may not be familiar, The Goon is a supernatural/horror comic written and illustrated by Powell, centering on the titular bruiser who takes on undead and paranormal baddies. It’s known for having hyper-stylized art and stories that combine comedy and horror.

All of this means that The Goon is still alive, but there is still a long ways to go before we see anything on screen.