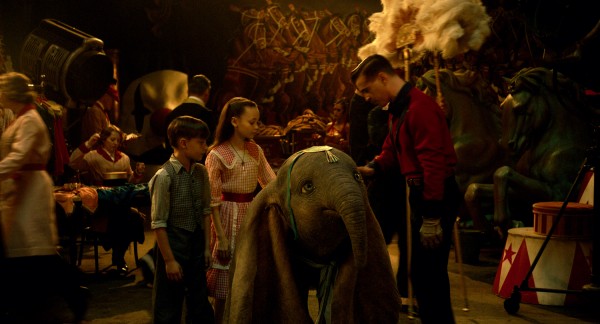 You can really sense Tim Burton’s presence in the new international trailer for Dumbo, the latest live-action remake of Disney’s animated classics. Three of them will be released this year, so if you dislike them…well, tough elephant nuggets. Anyway, Burton’s influence can be felt in the various carnival oddities and surreal quality that surrounds them. That Dumbo is a freak compared to other creatures is right in Burton’s wheelhouse. My first thought was how much this reminded me of my favorite Burton film, Big Fish.

This version of the film stars Colin Farrel, Danny DeVito, Eva Green, Michael Keaton, Alan Arkin, Finley Hobbins, and Nico Parker. You know the story; it centers on the little elephant with the very big ears that grant him the ability to fly like a bird. We haven’t seen Burton aim this squarely at the family-friendly audience in quite some time. I’m curious to see how audiences react.

Here’s the synopsis: From Disney and visionary director Tim Burton, the all-new grand live-action adventure “Dumbo” expands on the beloved classic story where differences are celebrated, family is cherished and dreams take flight. Circus owner Max Medici (Danny DeVito) enlists former star Holt Farrier (Colin Farrell) and his children Milly (Nico Parker) and Joe (Finley Hobbins) to care for a newborn elephant whose oversized ears make him a laughingstock in an already struggling circus. But when they discover that Dumbo can fly, the circus makes an incredible comeback, attracting persuasive entrepreneur V.A. Vandevere (Michael Keaton), who recruits the peculiar pachyderm for his newest, larger-than-life entertainment venture, Dreamland. Dumbo soars to new heights alongside a charming and spectacular aerial artist, Colette Marchant (Eva Green), until Holt learns that beneath its shiny veneer, Dreamland is full of dark secrets.