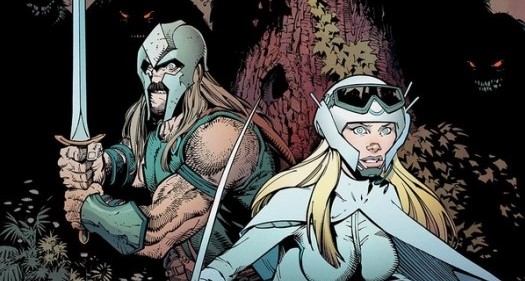 I think Sandra Bullock’s Bird Box had more viewers than their are actual Netflix accounts, or at least the numbers were astronomically high. And of course Netflix wants to stay in business with her, but the surprising news is the project they’re collaborating on next is an adaptation of Mark Millar and Greg Cappulo’s comic, Reborn.

It was just a couple of years ago that Netflix purchased Millarworld, the graphic novel universe of characters created by Mark Millar, creator of Wanted, Kick-Ass, and more. The streaming service will cash in on that now, with Deadline reporting that Bullock will produce and possibly star in Reborn, to be directed by The Lego Batman Movie‘s Chris McKay. Makes me wonder if he’s still doing that live-action Nightwing movie for the DCEU. Probably not.

Originally published by Image Comics in 2016, Reborn follows 80-year-old Bonnie Black, a Manhattan woman who dies in a hospital and wakes up reborn in the prime of her life in a place called Adstyria, “a magical land of monsters and dragons where good and evil are waging an eternal war. There, she finds old friends and loved ones waiting, except the husband who died before her. Armed with a sword and partnered with her late father, she sets off through the battle-torn landscape on a quest to find out where he is.”

No word on when this will begin, but it’s only the latest of many Millarworld projects Netflix will be revealing details on.