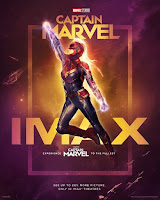 Last year during the National Championship game, Marvel dropped a special Black Panther teaser that offered fans new footage and one final reason to get excited for what was perceived at the time as a risky venture. The rest, as we know, is box office history. Now it’s Captain Marvel‘s turn, as a new trailer chock full of never-been-seen stuff has been dropped during tonight’s championship game, providing our first good looks at a young Agent Phil Coulson and the shapeshifting Skrulls.

There’s a lot to chew on here. Oscar winner Brie Larson takes over the role of Carol Danvers, who is gifted with extraordinary powers she doesn’t understand. In the trailer we see more of her interactions with a young Nick Fury, explaining to him that the Earth is being invaded by the shapeshifting alien Skrulls. While we’ve seen footage of them before, this is the first time we’ve seen them actually shifting. We also get more of Captain Marvel beating up the old lady on the bus, clearly a Skrull in disguise.

We also see the return of Clark Gregg as SHIELD agent Phil Coulson. The film takes place in the ’90s, and how the de-aged versions of Gregg and Samuel L. Jackson fare for the duration of the movie will be one of the most interesting things to track. Couilson was infamously murdered in The Avengers, then brought back to life in controversial fashion to star in the Agents of SHIELD TV series. This is his first time on the big screen since then, and I hope it’s the start of seeing him more often.

Despite all of the action seen here, I was surprised how it also sorta feels like a superhero buddy comedy between Danvers and Fury. It even ends on a comedic note as she takes a jab at his SHIELD hat and him at her costume. Clearly, these two are close which makes me even more curious why she’s been missing in action for the better part of two decades.