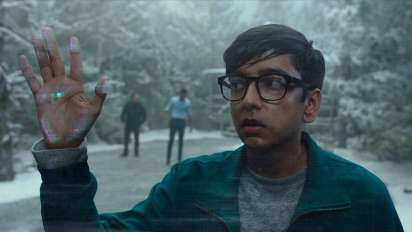 It was another big week for Aquaman, which fell only 41% and earned another $30M. That gives the Warner Bros. superhero film $940M worldwide, setting it on a clear path towards $1B worldwide. Already it’s the highest-grossing DCEU movie, surpassing Batman v Superman‘s $873M and Wonder Woman‘s $821M, while racking up numbers that compare favorably to what Marvel has done. I hesitate to say this is a turning of the corner, because we’ve been down that road before, but this is a good sign for the future of DC Comics movies.
2. Escape Room (review)- $18M
The opening weeks of a new year used to be a dumping ground but most recently it’s been fertile territory for low-budget horrors. Escape Room, which I liked a Hell of a lot more than our writer did, opened with $18M, about twice its production budget. The rest is gravy at this point. Basically, what you’re getting is a PG-13 version of Saw, as a bunch of people with tragic pasts must solve an escape room with lethal consequences if they don’t.  The biggest name by far is Daredevil and True Blood‘s Deborah Ann Woll, who is far from a box office draw, so this is trucking along based on genuine interest. There tends to be a steep second-week drop for early-year horrors, and I expect that will be the case here, but I wouldn’t be at all surprised to see Escape Room 2 on the schedule before too long.
3. Mary Poppins Returns– $15.7M/$138.7M
4. Spider-Man: Into the Spider-Verse– $13M/$133.8M
5. Bumblebee– $12.7M/$97.1M
6. The Mule– $9M/$81.1M
7. Vice– $5.8M/$29.7M
Adam McKay’s Dick Cheney film Vice earned another $5.8M for about $30M overall. That’s okay when compared to the other underperforming Oscar contenders this season, but is still pretty disappointing overall. Even with all of that star power, who exactly is the audience for a movie about one of the least popular politicians this country has ever seen? I have a feeling this does better in home release.
8. Second Act– $4.9M/$32.9M
9. Ralph Breaks the Internet– $4.6M/$187.1M
10. Holmes & Watson– $3.4M/$28.4M

Box Office: ‘Nobody’ Punches Its Way To The Top With $6.7M, ‘Godzilla vs. Kong’ Scores $122M Overseas Debut