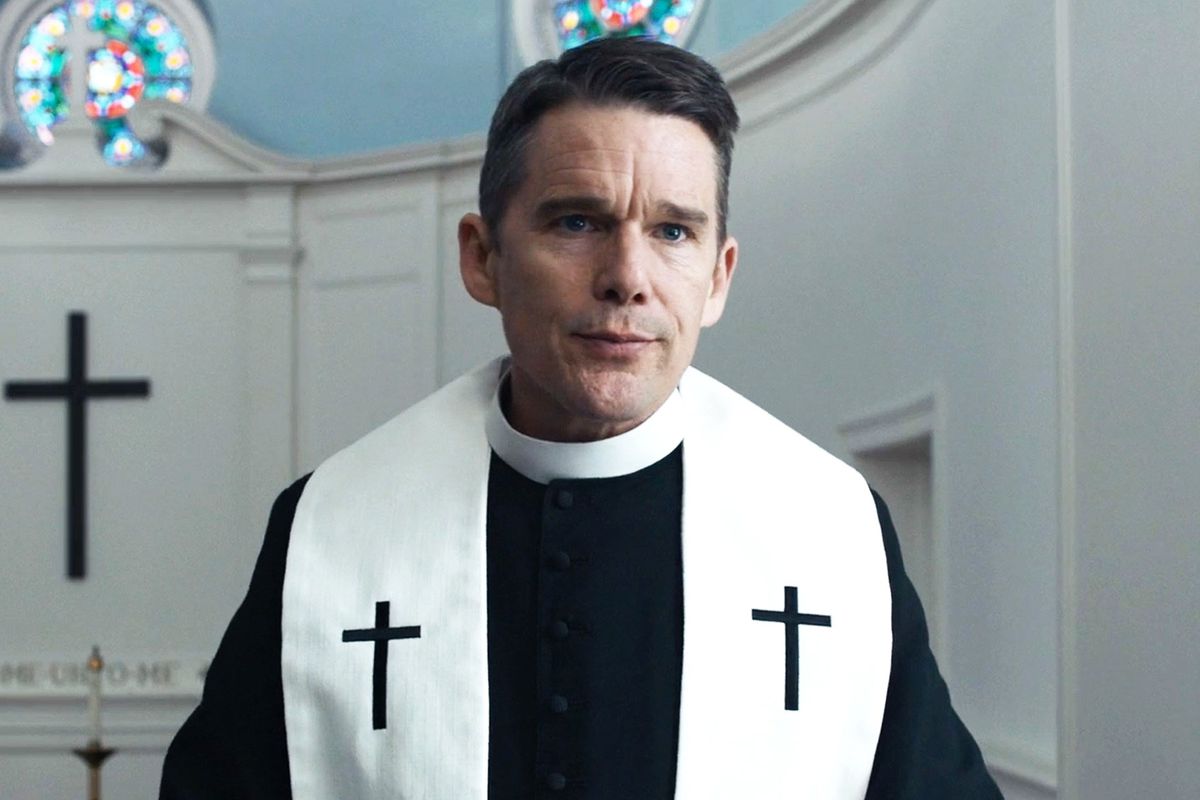 It was just two years ago that Rogue One was my top movie, then in 2017 The Last Jedi was narrowly edged out by The Florida Project. And to think in 2018 there won’t be a single Star Wars movie on the list, as Solo: A Star Wars Story was merely…well, it was okay. I didn’t even write it down as a consideration, and the number of movies I could’ve put on here is quite lengthy.

This was another great year of film, and I think my picks reflect the diversity we saw as Hollywood tried to make up for past failures. We saw arthouse films and blockbusters alike take up high-minded themes, John Krasinski emerge as one of our top horror directors, and Sony step up to challenge the big boys at Marvel…using Marvel characters.  I’ve said it before, but there’s no such thing as a bad year in film. There is always something for everyone to choose from and enjoy, and 2018 gave me plenty of entertainment in a wide array of genres. I even learned to love the rom-com again. Thanks, Netflix.

But this year I found myself pretty much bowing down to my fandoms. This was one of the best years I can remember for superhero movies, nostalgia, everything that brought out the kid in me.

Anyway, my list is both subjective and superfluous. Ask me tomorrow and it’ll probably be different. Spare me your emails asking why a certain movie isn’t anywhere to be found. Plenty of movies I liked a lot failed to make the cut. Sorry, Spike, you know how I feel about you but BlacKkKlansman was #21.

20. At Eternity’s Gate
Willem Dafoe captures the mystique, genius, and deep sadness of Vincent Van Gogh in Julian Schnabel’s lovely At Eternity’s Gate, a film as rich and layered as one of the artist’s cherished paintings.
19. Assassination Nation
With maniacal, violent glee Assassination Nation shoves everything wrong in America dead in our faces and dares us to be better. Those who are easily triggered need not fucking apply.
18. Bodied
Almost a companion piece to Assassination Nation, Joseph Kahn’s rap battle comedy Bodied spits uncomfortable truths about racism while dropping some sick rhymes.
17. The Hate U Give
A YA adaptation that isn’t about a white girl savior in a post-apocalyptic world, but a serious, important film about a black girl dealing with the reality of racism and injustice. The Hate U Give should be seen by everyone, regardless of age or race, and Amandla Stenberg has the performance I think will take her career to the next level.
16. Burning
Class resentment, loneliness, repressed violence, and ego make for a toxic but fascinating brew in Lee Chang-dong’s Burning, a slow burn thriller that features The Walking Dead‘s Steven Yeun as you’ve never seen him before. You’ll never think of him as Glenn again.
15. Never Goin’ Back
A spiritual companion to Spring Breakers, Augustine Frizzell’s unrelentingly raunchy Never Goin’ Back features brazen performances by Maia Mitchell and Jessie Camila Morrone as drug-addled young women who will do anything for a beach vacation. They’re both morons, often high on coke, but somehow they got this world figured out in a way nobody else does. I could watch this movie all day. And have.
14. Annihilation
I still can’t tell you what the Hell is really going on in Alex Garland’s weird, beautiful,  surreal sci-fi film, but I think that’s kind of the point? As Natalie Portman and her team venture beyond the veil to explore a strange phenomenon, the experience is wholly sensory and defies easy explanation.
13. Support the Girls
You might think that a film set at a Hooters-esque sports bar promoting “brews, boobs, and big screens” by a wait staff in crop tops and booty shorts wouldn’t be the most feminist movie of the year. But that is just part of the quiet brilliance of Andrew Bujalski’s Support the Girls, which keeps its girl power ideals close to the vest while acknowledging the daily struggle women go through, whether it be economic or casual workplace harassment.
12. Shoplifters
Japanese director Hirokazu Koreeda’s Shoplifters finds him once again exploring the idea of family, and whether the bonds we choose to forge are stronger than those we are born into. The close-knit group of struggling thieves live in the shadows, but step into the light to bring in a troubled young girl and make her a part of their family. The experience changes them all in profound ways, but the open-hearted example they set has the potential of changing us, as well.
11. A Star is Born
The first half of Bradley Cooper’s A Star is Born is basically one long extended first date between his alcoholic singer and Lady Gaga’s aspiring star. I haven’t wanted so badly to be the lame wingman just hanging out with them as they slowly fall in love over the course of a revelatory evening. It’s all just setup for Cooper’s surprisingly assured direction, which shows him skillfully capturing a swooning romance, a concert drama, and sobering tragedy all at once. Brilliantly done.

10. Deadpool 2
I feel like Deadpool 2 isn’t getting the love of the first movie and that’s unfortunate because this one’s better. It actually has a story, an actual hero arc for Ryan Reynolds’ foul-mouthed merc, and the God damned friggin’ Juggeranut! Plus the best cameo by the X-Men…well, ever.

8. Bumblebee
As Optimus Prime, Soundwave, Shockwave, and Starscream battled in the awesome Cybertronian sequence in Bumblebee, I squealed with joy in a way that I haven’t since I was an 8-year-old kid seeing Transformers: The Movie for the first time. My only hope is the guy sitting two seats away didn’t hear it, and that he doesn’t recognize me.

7. Green Book
By all rights I should’ve hated Green Book. I pretty much expected to. A Hollywood-ized look at racism, identity, and the overcoming of prejudice, the Peter Farrelly-directed (!!!) film is also a buddy comedy and road trip movie that’s practically begging for some Oscars love. And yet I can’t deny the sheer pleasure in Viggo Mortensen’s gruff Italian driver teaching Mahershala Ali’s refined classical pianist the delicate art of eating fried chicken. Sometimes it’s the simple things that hook me.

6. A Quiet Place
The movie I saw most this year had the least amount of audience chatter. John Krasinski’s A Quiet Place stunned audiences into a bond of silent fear with its terrorized family. I’ve never experienced anything like that before, and it could only happen in the theatrical experience. If there’s ever a movie that demands to be seen in a crowded multiplex, this was it.

5. Black Panther
Any movie that can make millions of people attend dressed like extras from Coming to America gets a thumbs up from me. The baddest, blackest movie of the year was Marvel’s Black Panther, which brought kickass superhero action, diversity, and social conscience to the MCU. This was a tough call for me, choosing between this and Avengers: Infinity War, especially since both feature incredible villains, and I’m all about the villains. Michael B. Jordan’s Erik Killmonger is a revolutionary with a warrior heart, a Malcolm X to T’Challa’s Martin Luther King. The ideological war between them is just as exciting as the physical one, and I hope Marvel realizes they can make smart comic book movies and people will respond enthusiastically.

4. Avengers: Infinity War
Like I said above, this was a tough call, but in the end I had to go with the movie that was completely dedicated to the villain’s journey. Josh Brolin’s Thanos is so much more than he has ever been in the comics. There’s a soulfulness to his genocidal quest that is both perplexing and captivating. Granted, I almost always root for the heel to win, but in this case I actively cheered on Thanos’ mad quest to wipe out the universe and smiled with glee when the snap of his fingers wiped away everybody’s heroes. He’ll get his comeuppance in a few months, but for now I’ll continue to savor his victory as the greatest pulled by any bad guy in the history of cinema. Who can claim to have accomplished more?

3. First Reformed
I had no idea what to expect with First Reformed, but it wasn’t much. Paul Schrader hadn’t made a movie worth seeing in years, Ethan Hawke is hit ‘n miss with me, and the religious subject matter isn’t at all up my alley. And yet I was hooked right from the start, as Hawke’s troubled Protestant minister grapples with his faith both in private, where he keeps a journal of his most sacrilegious thoughts, and in public where he can hardly hide his disdain for the world. It’s a fascinating, complex descent into spiritual oblivion that Hawke carries on him like the entire weight of the universe is on his shoulders.  One of the few movies I saw this year that you could show to a dozen different people and get a dozen different opinions about.

2. Spider-Man: Into the Spider-Verse
The best Marvel movie of 2018 wasn’t by Marvel Studios, but by Sony Pictures. The most diverse year in comic book movie history was led by a black/Latino kid named Miles Morales, and through him we are reminded of all the things that make Spider-Man the greatest of Stan Lee’s creations. He’s just a regular kid, and while he doesn’t have an Uncle Ben level tragedy in his life, Miles has his own problems to deal with having to do with his mixed-race heritage. That’s something we’ve never seen in a Spider-Man story on the big screen before. With an array of colorful characters, terrific humor, and kinetic animation, Spider-Man has never been this good cinematically and I hope it’s just the beginning.

1. Roma
As the soapy water washes away across the opening credits of Alfonso Cuaron’s Roma, for about 5 straight minutes, you instantly understand this is the kind of deeply personal movie that a filmmaker gets to make once in a career. For Cuaron, who is notoriously obsessive about every shot, he holds every frame of Roma so tight it’s like he can barely stand to let them go. A love letter to the era of his childhood and the women who inspired him, Roma is both intimate and profound, with gorgeous black & white cinematography that Cuaron, naturally, shot himself. It comes across less like a movie, and more as if we’re walking through a flipbook of Cuaron’s fondest memories. When we so often complain that originality is gone from Hollywood, Roma is truly a film that could only have been made by Cuaron.