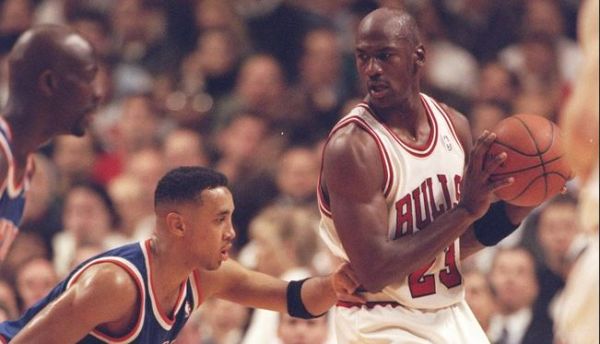 A trailer for a sports documentary series?? Not the usual thing I post here on the site, so what makes ESPN and Netflix’s The Last Dance different from the many sports docs out there? Because it’s about my beloved Chicago Bulls and the ’97-’98 championship season, their sixth and final one with the greatest player of all-time, Scottie Pippen. And some guy named Michael Jordan.

The 10-part series is directed by Jason Hehir, who must be my directorial spirit animal because he also did a movie on the only NFL team that matters, the Chicago Bears, and the ’85 championship season that got me into football as a kid. Super Bowl Shuffle, baby!  Anyway, The Final Dance is about the Bulls, with unprecedented access leading to over 500hrs of shot footage. In this trailer we see that Jordan, Pippen, coach Phil Jackson, Steve Kerr, Dennis Rodman, and more will be opening up about what that season was really like, and *shocker* they didn’t all get along so well. Fans of the team know their was always animosity, especially with Jordan being such a competitive asshole and Rodman a total loose cannon, but this movie is the first time we’ve seen so many players open up about it.

I can’t wait for this. Sadly, we won’t be seeing The Last Dance until 2020 rather than 2019 as previously thought,  so this trailer is really cruel.  They couldn’t have waited until mid-2019 or something?

“The Last Dance,” a 10-part documentary series will chronicle Michael Jordan and the 1990s Chicago Bulls, one of the greatest icons and most successful dynasties in sports history, will debut on ESPN in 2020. pic.twitter.com/B72ljh5GbE