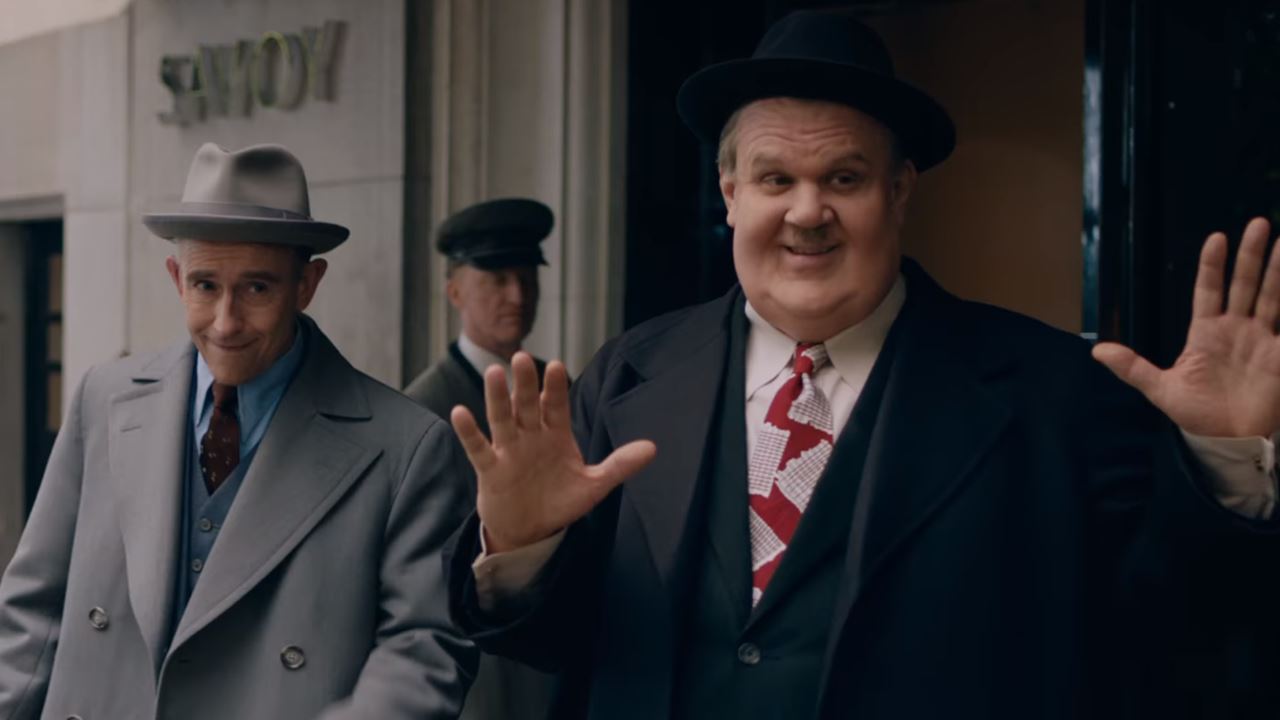 NOTE: This is a reprint of my review from the Middleburg Film Festival.

For more than 30 years beginning in the late 1920s, Laurel and Hardy were the preeminent comedy duo, starring in over 100 films and dozens of features. But it wasn’t all a barrel full of laughs, as seen in Jon S. Baird’s biopic Stan & Ollie, which stars Steve Coogan and John C. Reilly as the comic pair. Theirs was a partnership that was something more than strictly business, but definitely couldn’t always be classified as friendship. Lovingly penned by Jeff Pope with an admiration for the ways of old Hollywood, the film overcomes rote presentation through the extraordinary gifts of its multi-faceted stars.

Stan & Ollie takes an unexpected approach to examining the decades-long careers of Stan Laurel (Coogan) and Oliver Hardy (Reilly, fat-suited up something fierce), showing them not at the height of their notoriety but in its twilight. While they always gave the impression of being the closest of friends on screen, despite their vast differences in personality, mistrust, and resentment was a constant.  When a contract negotiating tactic leaves Stan on the outs and Ollie fulfilling his obligations (1939’s Zenobia), it drives a wedge that is still raw years later as they embark on a whirlwind tour of Britain to reignite their dying careers.

While we expect a lot of laughs from Coogan and Reilly, the film is hardly a joke-a-minute affair. Somberness is the prevailing mood as the comedy legends scrape by in half-empty theatre houses, and withhold painful secrets from one another.  It’s definitely a warts and all look at Laurel & Hardy that has as many tears as it does punchlines. Fortunately, Coogan and Reilly prove adept at handling both. Their impeccable comic timing and stagecraft are put on full display reenacting some of Laurel & Hardy’s unforgettable bits. Baird goes to exacting lengths to present an authentic look at the era, but it’s his stars who find such a perfect rhythm together as if they too had been partners for decades.

While Coogan and Reilly have that incredible comedic chemistry, individually they show sides to their characters that most people never knew. Stan’s hot-headedness and insecurity often drove him to make rash decisions that hurt his career, while Ollie was more sensitive than his outward appearance would suggest. When together, their everyday lives often played like comedy routines. They just couldn’t ever shut it off.

Nearly as funny and twice as contentious are Shirley Henderson and Nina Arianda as Ollie and Stan’s wives. As Lucille Hardy, Henderson is Ollie’s fiercely loyal, mousy-voiced defender when she feels Stan is taking advantage of her man.  Meanwhile, Stan’s wife Ida has a pretentious attitude as thick as her Russian accent.

Great performances aside, Stan & Ollie is presented in a generic fashion familiar to many docudramas. For far too long it only comes alive when Laurel and Hardy are on that stage doing what they do best. It’s then that you get a sense of what their comedy has meant to the world, and the legacy they left behind.