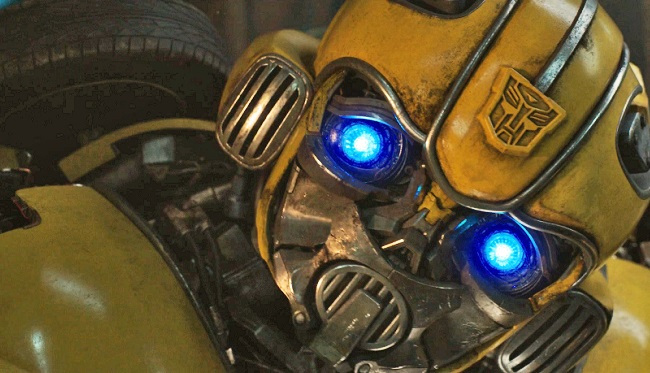 It takes all of 30 seconds into Bumblebee for it to be the best live-action Transformers movie. For G1 Transformers fans the opening minutes are the culmination of every hope and dream you’ve had for these movies. Cybertron War! Optimus Prime! Braun! Arcee (!!!!)  Soundwave! Shockwave! And they look like the toys we all used to play with (and some still play with *ahem*) as kids, not the mish-mash of scrapyard parts Michael Bay turned them into. It’s an incredible start, and my concern was that once the focus shifts to more earthbound concerns that high bar of excitement couldn’t be sustained.

Bumblebee is, to steal an obvious catchphrase, “More than Meets the Eye”. The first solo movie for Prime’s yellow sidekick and a prequel to the franchise, Bumblebee isn’t just a dumb-headed action flick like the others had been. One of my biggest problems with Bay’s films is that we never felt the influence of exec-producer Steven Spielberg, with the exception of maybe the first story. But Spielberg’s influence is all over Bumblebee, and presented with childhood awe and wonder by famed stop-motion director Travis Knight (of the recent Kubo and the Two Strings), whose love for Transformers is obvious from the start. This Amblin-esque tale is less about a war between Autobots and Deceptions, although that obviously plays a role, and is instead a story of a girl and her first car, her first love, and first steps into an uncertain future.

It’s classic Amblin stuff, adventurous, imaginative, and very nostalgic. Set in the 1980s, the story takes place near San Francisco where soon-to-be-18 Charlie (Hailee Steinfeld, still showing maturity beyond her years) has had to grow up quicker than a girl her age should have to. Her father died suddenly, and her mother has remarried a guy Charlie has no interest in knowing. So Charlie basically takes care of herself, working a terrible job dipping corn dogs at the local carnival, while trying to save money to get a car, or fix the beat up one she and her father used to work on together. Everything changes for her when the yellow Volkswagon Beetle she brought home from the junkyard literally has a life of its own. Without giving away the details, Bumblebee has made his way to Earth but has lost all memory of who he was; good thing the timid little ‘bot has found himself a new best friend.

So both Charlie and Bumblebee are dealing with some of the same issues. Both are sort of adrift and unsure, fending for themselves. They bond quickly over this, and the film does become a Transformers version of The Iron Giant, which really gets to the core of why these toys and original cartoons were so great. Charlie matures while taking care of and protecting her newfound friend, who the rest of the world perceives as a threat. Of course they do, that’s what these movies have always been about, right? Humans being scared about what they don’t understand? In this case, it’s a military unit led by Jack Burns (John Cena, clearly having fun underneath the grim exterior), who survived a first encounter with Bumblebee earlier, but has harbored a grudge ever since.

And of course there are Decepticons in the mix, too. Angela Bassett and Justin Theroux voice the Decepticon seekers Shatter and Dropkick, who have traced Bumblebee to Earth, putting humanity in jeopardy. They’re no joke. Knight and screenwriter Christina Hodson pull another page out of the Spielberg playbook in refusing to shy away from how evil the bad guys are. These Decepticons do unimaginably horrible things to some of your favorite Autobots, so you know they treat humans in a way that may be too much for the littlest kids to see.

You might have to imagine Bumblebee as a soft reboot because, man, it totally spits lubricant all over the time-traveling nonsense in The Last Knight. Everything about Bumblebee’s arrival undoes that awful, franchise-killing film and that’s for the better. Even the tongue-in-cheek touches, like the Internet being created by a pair of villainous Decepticons, are so much wacky fun they work. But the most important thing is that it sets a new tone, one where emotion and story work in concert with giant robot action. Bay’s films were always big, loud spectacles, and ugly ones at that. Bumblebee is a great movie that happens to have some beautifully orchestrated action scenes. Knight’s background in animation influences everything; he keeps the choreography simple. Bay was all about excess. Everything looks as if it actually exists and functions in reality, which is saying something when you’re talking about a robot that transforms into a car. You couldn’t help but see the CGI in Bay’s movies, but Knight gets you to look past all of that, even to forget it outright.

There’s a nice balance between Bumblebee’s mission and Charlie’s personal life, with both intersecting in fun ways. Love, Simon‘s Jorge Lendeborg Jr. is a goofy charmer as Charlie’s friend/sidekick/love interest Memo, finding real chemistry with Steinfeld in the scenes they share. But the greatest chemistry is between Charlie and Bumblebee, and the friendship they build has all of the heart these movies have been missing for so long.

It shouldn’t have taken this long to finally get a Transformers movie right, but now that Bumblebee has done it, let’s hope this isn’t the last time he gets to roll out solo. And it makes you wonder hat could these movies have been if Bay had left a long time ago?

‘F9: The Fast Saga’ Super Bowl Spot Gets Han Back Behind The Wheel