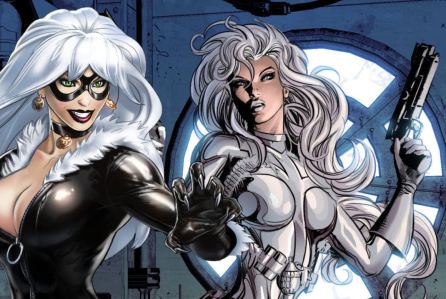 Sony’s first film in their Spider-Verse, Venom, doesn’t open for a couple of months and already the cinematic universe is getting a facelift. One of the first films announced to follow it was Silver & Black, a teamup of secondary Spider-Man characters Black Cat and Silver Sable. The film has faced problems with the script that put it on the shelf with no clear start date, and now we know that start date is never going to arrive.

Variety reports the Silver & Black film has been abandoned by Sony, who will instead break up the two characters into separate solo movies. As for director Gina Prince-Bythewood, who was attached to direct Silver & Black, the trade says it’s “unlikely” she will return to direct either film, but will stay on board as exec-producer on both.

The most promising film of the two is Black Cat, and that’s the one Sony plans to move forward on first. Also known by her civilian identity Felicia Hardy, the character is a cat burglar and occasional love interest for Spider-Man, although her criminal nature clashes with the hero constantly. If that sounds like the Batman/Catwoman relationship you’re spot-on, although creator Marv Wolfman insists that was never his plan.

“We believe Black Cat is enough of her own character with a great backstory and a canon of material to draw from to justify her own film,” said Sanford Panitch, president of Columbia Pictures.

Silver Sable is a mercenary and leader of the assassins-for-hire kown as the Wild Pack. She’s frequently called on to hunt war criminals, and has teamed up with Spider-Man on multiple occasions.  The character has had her own series on a few occasions but isn’t as recognizable as Black Cat, so her film is going to take longer to develop, assuming it happens at all.

Along with the previously-announced Silk, the two films join Sony’s growing slate of female-led superhero projects.